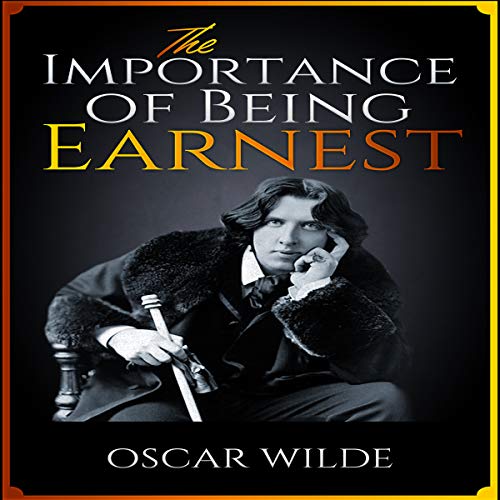 The Importance of Being Earnest

The Importance of Being Earnest: A Trivial Comedy for Serious People is a play by Oscar Wilde. First performed on February 14, 1895, at the St James' Theatre in London, it is a farcical comedy in which the protagonists maintain fictitious persona to escape burdensome social obligations. Working within the social conventions of late Victorian London, the play's major themes are the triviality with which it treats institutions as serious as marriage and the resulting satire of Victorian ways.

Some contemporary reviews praised the play's humor and the culmination of Wilde's artistic career, while others were cautious about its lack of social messages. Its high farce and witty dialogue have helped make The Importance of Being Earnest Wilde's most enduringly popular play.

What listeners say about The Importance of Being Earnest

One of the greatest comedic plays of all time

Wilde's 'The Importance of Being Earnest' is simply brilliant. It's a play that everyone should see or read (or listen to, in this case). It is a classic, filled with brilliant wit, farce and humour.

It tells the story of two young Lords, neither of them name Earnest, and their attempts to get two young ladies to marry them, both of whom decide they want to marry someone named Earnest. Both men have secret 'second lives' that they use to escape their normal life, causing confusion to each other and the ladies, and setting in motion a whole of of lies and mistaken identities. Through the play they learn the double meaning of the importance of being earnest (truthful) and of being named Earnest.

James Reynolds persofrms the play well - as well as you could expect from a single person doing a multipart play. He separates the characters, so it is easy to follow who is speaking and what is going on. while it's clear it's not multiple actors, he does characters well enough that it's a reasonable facsimile. He (almost) always hits the right timing for the humour. It is a really good recording of the play, and as I've already stated its a play everyone should know, this is a good way to hear it.

This is a great introduction to anyone not familiar with this Writers work.In fact it is playing in London as I am writing this review.

This Audio Book gives a brief glimpse into the great talent of the Author and why the work is still being produced today.


The Narrator helped make the Audio Book a entertaining experience.

witty. charming. unforgettable characters.
plenty of smiles, raised eyebrows and laughs even after120 years of Wilde.

If you like plays on words and inside out phrases, here is a feast for you. It was a little too much for my taste, there is a joke every six and a half seconds. It was enjoyable in smallish chunks. The narrator did a ripping good job, I feel like I just watched the movie with a full cast. This is a classic and if you want to listen to this play, here is a great rendition of it.

classic with narration that breathes life to it

this book is a classic and the new narration gives me another avenue of enjoying. There are other narrations on audible just listen to the samples and pick the one that works best for you.

The Importance of being Earnest

This was a really good version of this story.I enjoyed James Reynolds narration.I was given this book by the narrator,author or publisher free for an honest review.

The Importance of Being Earnest was greatly entertaining from start to finish, and even beyond that - even its title is a double entendere! Full of farcical humor, it satirizes upper-class society in the late Victorian times. Thematically, it was interesting to see certain aspects of society being satirized in their own time for similar reasons to what we find unusual about them now. We may think of ourselves as somehow enlightened and different because we can see problems in social norms in our own time, but the same was true over a century ago.

The reader was always clear and adopted exaggerated voices very well suited to the caricatured archetypes and ridiculous roles he was reading for, making the silliness all the more enjoyable.

I haven't had much experience with Oscar Wilde, so wanted to try this out. It was entertaining, almost slap stick. The narration was also good. Not sure I'm a new Wilde fan, but it is entertaining!

You Will Smile and Laugh Through The Entire Story

Funny listening to Algernon and Jack, two single friends who have invented another person to give them the freedom to do what they want without censure....this however comes back to bite them when they finally fall in love and wish to marry.
The silly expectations of society..the dialogue...the narrator all give the audience the fun and clever writing of Oscar Wilde.
ENJOY!

The Importance of Being Earnest
: Oscar Wilde

This fun classic made me chuckle a I listened.

The narration was well done. The characters were well portrayed by James Reynolds.