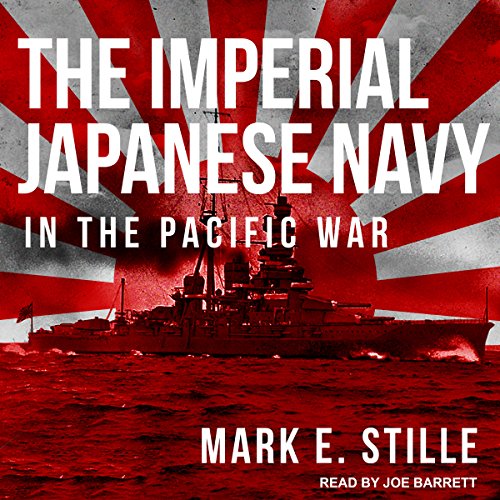 The Imperial Japanese Navy in the Pacific War

The Imperial Japanese Navy (IJN) was the third most powerful navy in the world at the start of World War II and came to dominate the Pacific in the early months of the war. This was a remarkable turnaround for a navy that only began to modernize in 1868, although defeats inflicted on the Russians and Chinese in successive wars at the turn of the century gave a sense of the threat the IJN was to pose.

Bringing together for the first time material previously published in Osprey series books, and with the recorded material of the addition of new writing making use of the most recent research, this audiobook details the Japanese ships which fought in the Pacific and examines the principles on which they were designed, how they were armed, when and where they were deployed, and how effective they were in battle.

A valuable reference source for Pacific War enthusiasts and historians, The Imperial Japanese Navy in the Pacific War provides a history of the IJN's deployment and engagements, analysis of the evolution of strategy and tactics, and finally addresses the question of whether it truly was a modern navy, fully prepared for the rigors of combat in the Pacific.

I had read the print copy when it first came out and was surprised to see an Audible version arrive, since these sort of books tend to not get audio renditions. Mark E. Stille is one of the premier authors of naval books, books that tend to deal more with the technical aspects of the world's navies - specifications, classes and brief histories. The print books from Mr. Stille tend to be in the 80-100 page range, with many photographs, and deal with a specific class or nationality of naval vessel. But "The Imperial Japanese Navy in the Pacific War" is one of his longest works and deals with all the major units of the IJN - carriers, battleships, cruisers, destroyers and submarines. You can find references on those individually, but this book contains all of them in one place.

It's not a standard history of any aspect of the Pacific War, though it is covered in relation to the histories of the ships. But if you enjoy learning about the development and specifications of naval vessels, this book and others like it from Mr. Stille, are very enjoyable.

but very painful and annoying to sit through given the narrator's ignorance of Japanese culture and language. Aaargh! If I was the author, or the publisher, I'd be upset.

This is an audio reference book

This was a strange audiobook experience for me, as it was the first time that I ever listened to a reference book rather than a straightforward narrative book. That said, there is a world of detail available here for the serious student of military history. Author Stille goes through the entire WW2 Japanese navy, ship class by ship class, giving descriptions of construction, armament and power plant. Then, he briefly outlines that class's operational history. Once finished, he moves on to the next class.
Hence, if you want a conventionally-structured exciting battle narrative, this really isn't it. However, if you have deep interest in the IJN and want extreme detail on each ship type, even if it makes for a somewhat dry read, then this is exactly what you are looking for.

This has good info however I was hoping for more information about the campaigns of the IJN. This is like just listening to someone read a blueprint, might be exciting for an Engineer however not me.

I purchased this book for listening and found it impossible to understand. Then I purchased the book and enjoyed it very much. I highly recommend that if you are interested in the subject matter that you purchase the book.

Exactly what I wanted.

To explain what the IJN really was some specifications of hardware must be mentioned. I don’t find it technical. Technical to me would be aspects like boiler types and ratings, fuel oil capacity, etc. I find it a good book to continue deeper research into the Pacific War.

Well worth the time. Recommended for anyone interested in the IJN in WW2. Narrator was clear and understandable.

much detail concerning Japanese ships and their use in WWII. a little too detailed for my taste. it was definitely hardware orriented with little information about the crews and leaders, and their activities.

A Little Dry, but Informative

This book reads more like a spread sheet. Lot's of general info on individual ships, classes, etc. ; but not much in the way of individual Pacfic actions. Still worth listening to.

Great book on IJN ships. It’s more a History Of Individual ships and their fates than a narrative of the IJN in the Pacific War. Listening to a book based on that premise sounds like it would be quite dry, surprisingly the opposite was true. When I finished I felt the book was over much to soon - a rarity for me. I am already familiar with many of the ships covered or at least the results of the battles they were in from the multitude of General Histories Of The Pacific Naval War I have read in the past. The Author’s approach of covering the ships themselves- famous and not so famous - as opposed to an overall view of the war itself allowed him to include a lot of new (at least for me) information on the specific ships of the IJN. There is a lot of information packed in a relatively small book. If you are interested in the big picture of the IJN in WW2 this is not the book. Highly recommendable to those who want more specifics on the ships themselves.