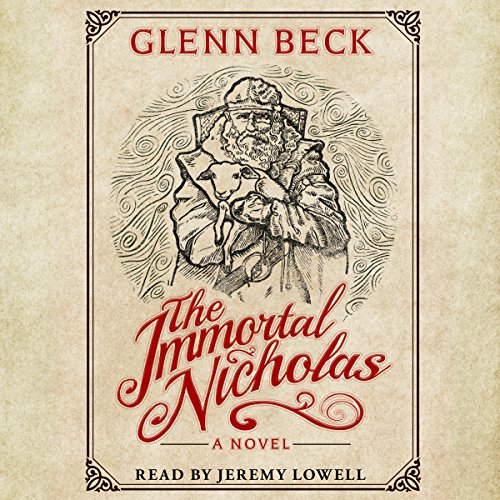 The Immortal Nicholas: The Untold Story of the man and the Legend

The Immortal Nicholas: The Untold Story of the man and the Legend

BEFORE HE WAS FATHER CHRISTMAS…HE WAS SIMPLY A FATHER.

Thirteen-time #1 national bestselling author Glenn Beck realized years ago that somewhere along the way, his four children had become more focused on Santa than the meaning of Christmas. No matter how he tried, he could not redirect their attention away from presents and elves to the manger instead.

Glenn didn't want to be the Grinch who spoiled the magic of Kris Kringle, so he had to find a unique way to turn his kids back toward the true meaning of Christmas. He decided the best place to start was by first turning Santa himself back toward Christ.

That was when one of America's best storytellers began to craft a tale that would change everything his kids thought they knew about Santa—the incredible story he went on to tell them that Christmas Eve spans over a thousand years and explains the meaning behind the immortality and generosity of the man named Claus.

The Immortal Nicholas has now been expanded and reimagined into this novel for adults; a novel full of drama, history, legend, and heart. From the snowy mountains of Western Asia, to the deserts of Egypt, to Yemen's elusive frankincense-bearing boswellia trees, this is an epic tale that gives the legend of Santa a long overdue Christ-centered mission.

In this novel, Glenn Beck fundamentally transforms the figure that the world now mainly associates with shopping, all while staying true to the real story of the baby who brought redemption and salvation to the entire world.

When I purchased the book, I was hoping to get a good story. I had previously read Glen Beck's Christmas Sweater, but with my background, I didn't relate. This book was highly entertaining with characters that immediately pulled me in. I am happy to say I would recommend this book. An inspirational story paralleling the commercialized Coca-Cola/Macy's Santa with a more substantive character that doesn't treat audiences like customers. This Santa has depth deserving of the character. Filled with the spirit of the season of the birth Christ.

I absolutely loved this story!!!!

I knew I couldn't delay listening to this book, and now that I've finished, I'm going to give this precious book to as many as I can for Christmas. My prayer is that they will draw closer to the true meaning of Christmas: Christ, through reading this book. Thank you Glenn Beck for touching my heart through this tender story and reminding me yet again why I love Jesus so much.

I could not wait to finish it! What an inspiring story putting Christ back into Christmas & tying the myth of Santa into the spirit of giving as Christ did for us. The serman on the mount so touching to me. This must be made into a movie!

I cannot imagine a better book to read during the Holidays. It is the only book that has ever given me any kind of understanding whatsoever of how Santa can actually beautifully and perfectly align with what Christmas is truly about. I highly recommend this to anyone!

Finally a beautiful way to link the legend of St. Nick with the birth of Christ. Whether you agree with Glenn Beck or not he is a masterful story teller. This one won't disappoint!

Brings Santa Back To Christ

Really enjoyed this wonderful tale that weaves the origin of Santa Claus with the birth, crucifixion and ascension of Christ.

This historical fiction the crosses paths with the most important figure in all history is a story a father can relate to and a story that all men can connect with believer or not. I had long ago abandoned the Santa image because of its buy this and I want this. With a new image and a new name he may be coming back to my home and my children know this tale.

I was captivated from the beginning to the end. Masterfully written story that nails it!

If you could sum up The Immortal Nicholas: The Untold Story of the Man and the Legend in three words, what would they be?

A very personal experience of spiritual growth and understanding.

The way Krampus was so broken, yet the wisest of them all.

When he is forcing Krampus out of the city after the crucifixion and Krampus tells him to not pay hate and anger with hate but with forgiveness.

Absolutely beautiful and thought provoking book. It's a wonderful experience that you won't ever forget taking.

A joyful story for Christmas

Enjoyed every bit of this book, without hope we have nothing, we all need something to believe in... Thank you Glenn Beck