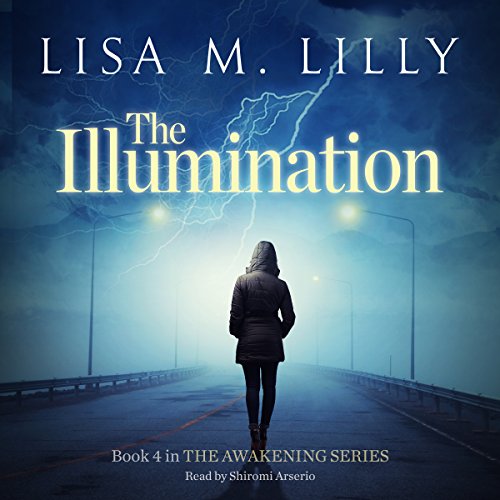 In this final installment of the best-selling Awakening Series, Tara Spencer comes face-to-face with the forces that caused her supernatural pregnancy. She also learns the truth about her child's origin - and her own.

On awakening from a 13-month coma, Tara discovers the well-adjusted infant she remembers is gone, replaced by a toddler who shies away from her mother and who has yet to speak her first word. Threats and violence have split the Spencer family apart, and protestors plague Tara wherever she goes after discharging herself from the hospital.

A young woman arranges to meet Tara, giving her what she says is the key to unraveling the mystery of Tara's pregnancy and mission. But she brings news of death and destruction as well and is suspicious of Tara's closest allies.

Struggling for answers, Tara seeks out the man she believes was responsible for the kidnapping of her beloved daughter. Tragedy follows, and Tara despairs of ever freeing herself and her child from danger.

Tara longs for a guide, but when she finds one, the message she hears nearly destroys her.

How much must she sacrifice to save the world?

What listeners say about The Illumination

I have not read/ listened to any of the other books in this series. Despite that, I did not have difficulty getting into the story. I am now intrigued and would like to listen to the others in the series.
There are not any explicit sex scenes, violence or swearing.

This is an original story about a young woman and her daughter, believed by many to be the messiah or anti-christ. In this book, Tara learns more about who kidnapped her daughter, who is plotting to harm them and why, the reason behind her virgin pregnancy and what she needs to do to claim back her life.

The narrator has a pleasant voice and did well with the different characters. Her character voices were discernible. I would listen to another book by this narrator.

the first 3 books were great I liked the series very much ..
the 4th book was good as well although I had some problams with it .
I was wating for more drama because she was necessary in this case in my option but it didn't Escalade like I was expecting maybe it's not a bad thing so I give this book 4 stars.

I decided to listen to this book because when I read what it was about, caught my attention. I finished it because I have to finish the story once I start it needing to know how it will end. I was not really crazy about it. It was to slow for my liking.

I received this audiobook at my request free for an honest review.

Shiromi Arserio is a fine narrator for this book.Tara is trying to keep her daughter safe after coming out of a coma.People seem to expect more of her than she is capable of doing.It seems there is no one she can trust.I found this book slow moving and just not as pulled together as the others.Too much repetition.“I was voluntarily provided this free review copy audiobook by the author, narrator, or publisher.”

I have not listened/read the other books in this series but I loved the description so I thought I will give it ago.

I found it slow and confusting to begin with (this might be due to the fact I have not read the others in the series) but once it got going it improved.

I did not read the first 3 books but picked this up because it sounded interesting and I can usually get into a series even if I didn't start with the first book. That being said, I never really got into it. I credit that for my not having read/listened to the first 3 books. Because of that, I did not give it an overly negative review score. The narrator was great, but I just never felt like I understood why things were happening, so I highly recommend starting with book 1.

Did not Meet My Expectations

I got this book via audiobook boom and this is my voluntary review. I did not read the first three books but was given access to this one and I looked at the reviews of the other books. I expected more from this one. I was well into chapter 4 before I connected with the story. Perhaps if I had listened to the others it might have been better. The story surrounded a young lady and her child who are able to heal not only people but the earth. I like the concept but it took a long time to get to the point of the story.

I’m first listening to this book, the 4th in the series, as opposed to starting from book 1, so keep that in mind:
The premise is interesting; the action keeps moving along; the characters aren’t melodramatic. If you like Dan Brown-type stories with shadowy organizations as the bad guy, this one’s for you. This installment tells the how and why...
Arserio’s narration would benefit from a little more differentiation between characters; some are clear, some not, like Tara and Cyril.
I was given this free review copy audiobook at my request and have voluntarily left this review.

I had received this 4th and last book of the series and had started listening to it, without knowing the "previously on.." part. Thus I wasn't understanding what's happening really. So, I went to amazon and got the book 1 of this series and finished reading that. I know had basic understanding of the premise. I skipped book 2 and 3 and only read their reviews that discussed part of the plot in those books. I then restarted listening to book 4. And.... I'm disappointed.

Book 1 had set the stage on a grand scale. It created too much intrigue and left you wanting more. From the reviews, I can see book 2 & 3 took that further. All that build-up leading into this book 4 and then the big reveal at the end... wasn't quite satisfactory. It felt like a letdown. I'm glad that I skipped 2, 3; or else I would've been more disappointed by this ending, having spent all that time in reading those.

The narration was alright, but different characters had mostly the same voice. That could've been done better.