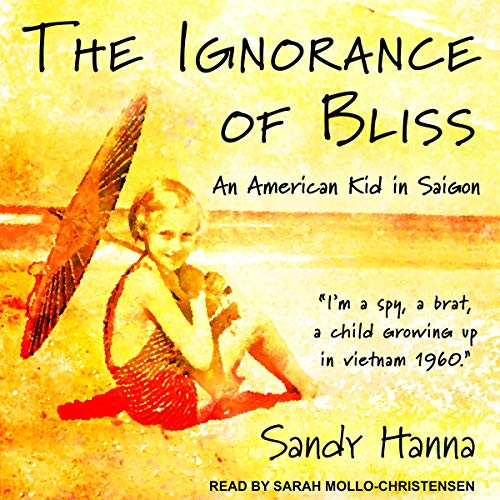 The Ignorance of Bliss

The Ignorance of Bliss

The Ignorance of Bliss tells the true story of 10-year-old Sandy, who moves with her American military family to Saigon, Vietnam, where her father, the colonel, serves as a military advisor to the South Vietnamese Army.

In 1960s Saigon, Sandy finds a world of crushing poverty and extraordinary beauty; a world of streets, villas, and brothels, where politics and intrigue reside between plot and counterplot. Blissfully living a life of French decadence, Sandy maneuvers between coups, spies, bombings, corruption, and scandal as she and her 13-year-old brother, Tom, run an illicit baby-powder and Hershey-bar business on the black market and live a life of school, scouts, dance parties, and movies at the underground theater.

When the colonel's counterpart, Colonel Le Van Sam, delivers an expose on the current ruling Diem regime, Sandy finds that her constant spying on her father's activities has brought her face-to-face with the reality of Vietnam and the anti-American sentiment that pervades it.

This coming-of-age story takes place in a turbulent country striving for nationalism, giving the listener a stunning look into the life of military dependents living abroad and the underlying ignorance that surrounded a little-understood time in history.

What listeners say about The Ignorance of Bliss

This book is well written and I loved listening to the narration. If you are a military BRAT this book is a must-read. If you are not then I recommend it anyway because of the rich history in her story. Vietnam is a great example of Winston Churchill‘s quote “those who fail to learn from history are condemned to repeat it.” Great read! Great listen!

A Well Told Memoir Thru the eyes of a Young Girl

I both enjoyed and appreciated this coming of age account of a US military girl and her family in Saigon during the Vietnam involvement in the 60s. It was so well told with heart, sensitivity, and humor and helped me to understand what really happened . I liked how she conveyed the culture and beliefs that are often overlooked , but critical to understanding other countries.