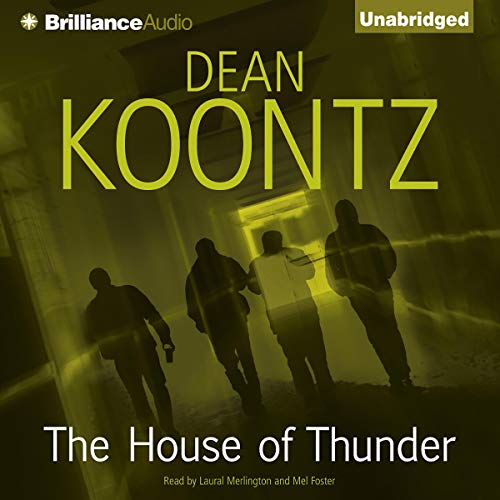 The House of Thunder

By: Dean Koontz
Narrated by: Laural Merlington,Mel Foster
Try for £0.00

In a cavern called The House of Thunder, Susan Thornton watched in terror as her lover died a brutal death in a college hazing. And in the following four years, the four young men who participated in that grim fraternity rite likewise died violently. Or did they?

Twelve years later, Susan wakes in a hospital bed. Apparently involved in a fatal accident, she is suffering from amnesia. She does't remember who she is or why she is there. All she knows is that her convalescence is unfolding into a fearful nightmare - and that the faces that surround her, pretending loving care, are those of the four men involved in that murder years ago.

Have the dead come back to life? Or has Susan plunged into the abyss of madness? With the help of her neuro-surgeon, Susan desperately clings to her sanity while fighting to uncover who or what could be stalking her.

"The reading duo of Merlington and Foster is smooth together. First, they lull you into an almost peaceful state of mind, then they lower the boom - sending chills up your spine." ( AudioFile)

What listeners say about The House of Thunder

Disappointing: just the main character talking to himself. Every new writer is instructed to show, don't tell.
I can't believe Koontz doesn't know about that.

Wondering why at the end...

I got to the end and found myself wondering why, not a bad story but the narration for me sounded like a Disney production. It picked up towards the end

Would you try another book written by Dean Koontz or narrated by Laural Merlington and Mel Foster ?

What didn’t you like about Laural Merlington and Mel Foster ’s performance?

First of all, having two people narrating in this way does not work. The male voice narrating a line of dialogue, followed by a female voice saying 'he said' sounds ridiculous. Laural Merlington made the 31 year old Susan Thornton sound like a whiny teenager. Mel Foster seemed to be doing an impression of The Count from Sesame Street for his first character.

a well designed plot. even the inconsistencies are correct. great immersive experience. sincerely wished it was much longer. thanks

I have just listened to this a second time. I was hooked again. I fell in love with the character (and voice) of Dr McGee and I thought the interplay between him and Susan Thorton was excellent. There is a great twist at the end.

I am a big Dean Koontz fan but this one is a klinker. Its hard to believe that this really smart character doesn't have a clue until the very end, when the reader has it pretty much figured out in the first chapter. Her obtuseness during the remainder of the book is frustrating, and the resolution outdated and unsatisfying (this book was written in the 80's and it shows bigtime). I would recommend Watchers (my favorite) or any other choice but this one.

Dean Koontz is my favorite author and I was overjoyed when I learned that Audible had acquired 13 "NEW" Dean Koontz audiobooks. However, my joy lessened and soon became disappointment when I realized that these new editions, all but one, predate those titles that were previously available at Audible. I was not disappointed simply because I discovered that these novels were written earlier in Mr. Koontz' career, but because of the quality of my first selection, House of Thunder.

House of Thunder, published in 1982, is almost unrecognizable as novel by the same author of my favorite novel, Intensity. Adding to the dubious plotline and poorly drawn characters, House of Thunder has the misfortune of being recorded as a dual recording by actors who may not be able to find work in soap operas. It stubbles along as something less appealing than even old radio dramas and is made even more clumsy than those types of recordings by the required insertions of "he said" or "she said", after each narrator speaks, to be literally accurate.

In comparison, Intensity, published in 1995, is like fire caught up in a bottle, its light flickering from orange to blue and then to blazing red. It begins, "The red sun balances on the highest ramparts of the mountains and in its waning light, the foothills appear to be ablaze. A cool breeze blows down out of the sun and fans through the tall dry grass, which streams like waves of golden fire along the slopes toward the rich and shadowed valley...He feels the cold glimmer of stars that are not yet visible.

The author's talent improved as his journey lengthened. Though I was disappointed with House of Thunder, I was less so with Winter Moon, published in 1994. Though published just one year before Intensity, Winter Moon falls short of this author's genius.

I won't rule out the earlier titles, but I would hasten that the buyer beware by finding publication dates on the web.

Too much helpless victim being afraid.

STORY BRIEF:
In 1967 Susan saw four fraternity brothers beat her boyfriend to death in a college hazing. They were going to kill her, but she escaped and testified against them. Two of them later died in a car accident. It is now 1980. Susan just woke from a three week coma from a car accident. During the next several days she sees the four fraternity brothers in the hospital. Two are working as orderlies and two are patients. The four men get her alone and tell her they are going to rape and kill her. This happens repeatedly. She is afraid all of the time. She tells her doctor about them, but he explains that they could not be the same men because the men in the hospital are about 20 years old, not 33, and they have different names. Logic says she must be going mad, because this couldn’t be happening. No one believes her.

REVIEWER’S OPINION:
I listened to the first 4 hours and was very frustrated. She was such a helpless victim. Over and over again she is afraid and being hurt by these men. I wondered if this whole thing was going to end up being one long dream - because two men had died. Or did the deaths not happen? Or was this a hallucination or drug induced hallucination? Was she hypnotized? Or had she died and was this happening in hell? Or was she really going insane? It was not fun. I was tired of it, so I skipped the next 3 hours and listened to the last 2 ½ hours. When I started listening at the end, the same thing was still going on. She was running from these men, but they kept showing up, hurting her, and frightening her. I was glad I skipped three hours of that. Finally, the last 50 minutes was a different kind of story. That part was more interesting and not just the helpless victim. The truth is learned and there is some action. However, it’s done in a tell-all method with one character explaining everything. Tell-alls are not a good way to end a story. The ending was too easy to be believable, but at least it was happy.

Some experts say don’t write about a wimp. This felt like 9 hours of writing about a wimp. I would have preferred that the first 9 hours of possible madness be shortened to maybe 2 hours. It might have been better as a novella.

The two narrators were good: Laural Merlington and Mel Foster.

This novel has its moments, but was not my cup of tea. There was terror and violence, but it lacked the cleverness in the protagonist that I enjoy most in Koontz. The narration was good, the story acceptable, but the characters were forced by the story to be less well rounded than usual Koontz.

Susan Thornton is the main character in this book. After a car crash she wakes up in a hospital and can't remember various parts of her life. What she does remember is a murder she witnessed when she was younger. Then anytime someone mentions her employer, who she can't remember panic sets in.
This was a great fast paced book. I read it in one day. Like most of the books by Mr. Koontz, the characters are colorful and well written. At times this book is a little far fetched but that's fiction.
If your looking for a book that is part medical thriller, espionage thriller, supernatural and just a lot of fun to read, then this is for you.
I gave this book 4 stars and have recommended it to many of my friends.
Pick it up and enjoy.

You won't put down your ipod until the very end.

Not as good as I remember it

I could barely get through the audiobook. Mainly because of the terrible voice acting. I read House of Thunder back in the 90s in the Army and couldn't put it down. The female voice sounded awful to me. Most of the male voices too. A decent story can be butchered by poor voice performance.

The Worst Koontz Story ever

Didn't care about the characters (kinda hoped she would be killed). Had to listen because I I already paid for it. Maybe I will exchange for something else.