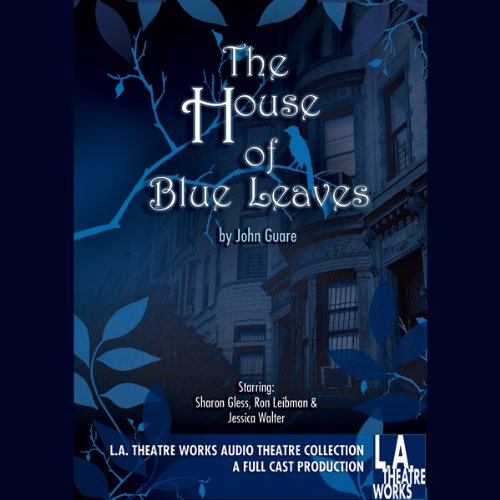 The House of Blue Leaves

L.A. Theatre Works' presentation of Guare's Obie Award-winning comedy is first-rate. It takes place in the early 1960s in New York City on the day the pope is coming to town. The characters and the action run the gamut from desperate nuns, a political bombing, a GI headed for Vietnam, and a woman who strikes a bargain between sex and great cooking to a zookeeper who dreams of making it big as a songwriter and his schizophrenic wife, who is destined for an institution. Sharon Gless, Jessica Walter, and Ron Leibman deliver strong portraits of flawed characters - some funny, some despondent, some frustrated, and some hopeful. Their vocal characterizations - full of vitality - provide bittersweet glimpses into the lives of these unfulfilled characters.

This poignant Obie Award-winning comedy unfolds in New York City on the day the Pope is expected to visit. Hearts are palpitating in the sleepy borough of Queens, but not entirely on account of His Holiness. Bunny Flingus, a femme-fatale from Flushing (or thereabouts) is stirring things up in the quiet, unfulfilled life of aspiring songwriter Artie Shaughnessy. Artie longs to leave his unhappy marriage, elope with Bunny, and write a hit song that will top the charts.
©1996 L.A. Theatre Works (P)2007 L.A. Theatre Works

What listeners say about The House of Blue Leaves