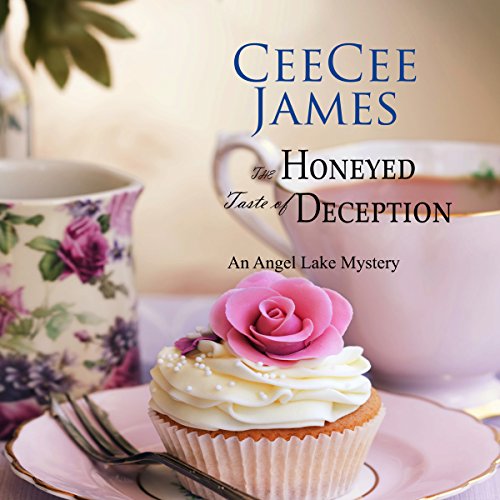 The Honeyed Taste of Deception

By: CeeCee James
Narrated by: Jennifer Groberg
Try for £0.00

The only thing worse than a pregnant bridezilla is a corpse as the wedding cake topper. And Craigslist is the biggest clue.

When Elise Pepper begins her job at the Dream Wedding Boutique, she thinks her life is finally back on track. Her boss is more highly-strung than the customers, but she can deal with that, and she's up for the challenge of a new job.

Or so she thinks. When a bride turns up demanding a circus-themed wedding to honor her late father, things get a little crazy. Clowns instead of bridesmaids? A sword-swallower as celebrant? Elise is sure she can handle it all. A dead man in the wedding cake may be a little too much to deal with, though. Just when she thought she had it all together, Elise finds herself in the middle of yet another murder investigation. Can our intrepid heroine track down the killer before more wedding guests die?

What listeners say about The Honeyed Taste of Deception

The honeyed taste of deception

This book was entertaining and quite different from what I usually read. I just love this author!

Delightful mystery with good twist at the en

Delightful characters and good plot. Hired by a wedding planner and caught up in a circus wedding amidst jewel heists, Elise is overwhelmed with mysteries. A surprise ending involving her own life and her friend also delights. Well read.

The reader did an excellent job narrating. This cozy mystery is a delightfully exciting story and there is just the right amount of humor.

In The Honeyed Taste of Deception by CeeCee James, Elise has found a job, but it turns out that working for wedding planner Sonia is no easy task. But even more demanding than Sonia herself is the crazy woman who redefines the idea of a Bridezilla. Catalina, who originally planned her wedding for six months from then, suddenly announces that she needs her wedding to occur in two weeks. Things take on an even crazier note when Catalina abruptly decides, while under the influence of valium, that she wants a circus- themed wedding with lots of clowns. She comes from a family of "carnies" and wants to honor them with her wedding theme. So Elise spends the next two weeks running all over to help Catalina have her circus wedding.

During Elise's first meeting with Catalina and Cooke, Elise, Sonia, and the couple hear an explosion and an alarm sounding nearby. Rushing to the door, they see people in painter's masks milling about the jewelry store a few doors down. Someone has robbed the store, getting away by putting an ad on Craig's List that anyone who comes dressed as a painter would get a job and sneaking out in disguise. The police tie the robbery to similar ones that used similar methods of operation, causing the case to be dubbed the Craig's List Criminals. As much as Elise tries to stay away from crime, she finds herself embroiled once again in another mystery.

I loved this book, which gripped me from start to finish. The mystery plot only appears from time to time, but all the details of the crazy wedding planning of Catalina make the book incredibly delightful. Watching Sonia and Elise pull off a circus wedding made me laugh out loud at times. I thought it funny when Catalina announces that her dream wedding cake is an ice cream cake or when she orders 4,000 green carnations without giving Sonia and Elise notice of her doing so, leaving them in a panic when they think the florist has made a mistake in the order. But despite the fact that the book does not spend all its time focusing on the crime, the solution was incredibly satisfying, surprising me but making full sense.

I also like the dynamics of the relationships among the characters. For example, Elise has progressed much farther in her relationship with police officer Brad, whom she calls her best treatment to deal with the stress of her new job. Further, Elise has a fun relationship with Lavina, her best friend, who has a unique personality.

Jennifer Groberg proves once again that she is a highly suitable selection to narrate this book. With believable voices and effective accents, such as the Tennessee accent that becomes stronger when Elise speaks and strongest at the speech of Lavina. Groberg uses effective intonations and pacing to make the book especially lively.

I can definitely recommend The Honeyed Taste of Deception as a book very interesting and humorous. The mystery has interest, while the characters have unique personality. I give the book five stars.