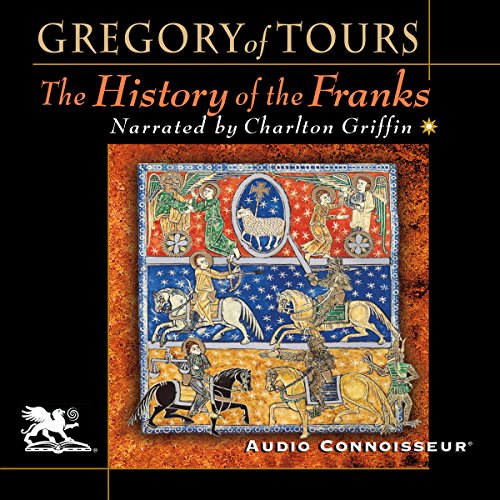 The History of the Franks

The History of the Franks

By: Gregory of Tours
Narrated by: Charlton Griffin

Gregory of Tours was a Gallo-Roman aristocrat and Catholic prelate born in 538. He died 56 years later, in 591, a period in which the brutal Merovingian rulers of the Frankish nation consolidated their power over most of Gaul. Gregory experienced the transition from the dying world of Roman antiquity to the new culture of early medieval Europe. He lived on the border between the Frankish culture of the Merovingians to the north and the Gallo-Roman culture of the south of Gaul. He struggled through personal relations with four Frankish kings: Sigebert I, Chilperic I, Guntram, and Childebert II, and he personally knew most of the leading Franks of his day.

The book opens with a recounting of the world's history from the creation but moves quickly to the Christianization of Gaul, the life and times of Saint Martin of Tours, the conversion of the Franks, the conquest of Gaul under Clovis, and the more detailed history of the Frankish kings, down to the death of Sigebert I in 575. The second part, books V and VI, closes with Chilperic I's death in 584. The third part, comprising books VII to X, is an increasingly personal account down to the year 591.

As bishop of Tours, Gregory could not have been better placed to hear everything and meet everyone of influence in Merovingian culture.

Perfect for a Medieval Historian, although -

I was hoping for insight into the daily routine of the Franks, what technologies they used, what their values and motivations were. This has none of that. This is, however, a complete-to-the-last-detail history of the kings, chieftains, petty rulers, and bishops of the Roman Catholic Church. It is exhausting, but it is as complete and (given the time in which it was written) accurate a history of the Franks as you can get.

Listening to it would have been painful except for the narrative. Man, this narrator is good! He could infuse a phone book reading (if we still had phone books) with intrigue and mystery. If what you want is the details of the wars, the assassinations, the jealousies, and the constant changes of rulers, this is the book for you. And this is the narrator for everyone.