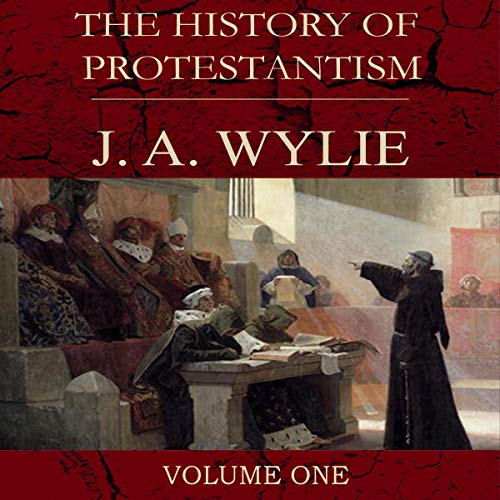 The History of Protestantism: Volume 1

The History of Protestantism by J. A. Wylie is an incredibly inspiring work. It pulls back the divine curtain and reveals God's hand in the affairs of his church during the Protestant Reformation. Throughout the centuries, the sacrifices and victories of God's faithful people have often been obscured and forgotten. Now, once again, you can listen to the fascinating story of how truth triumphed over error, principle over falsehood, and light over darkness.

Exposing the forerunners of Protestantism, such as the Waldenses, and describing how the Roman Catholic church had progressed since the fall of the Roman Empire, Wylie explains how discussions on religion and the position of the Church of Rome in mid-16th-century Europe was a hot topic.

He writes on the history of the founding fathers - Luther, Hus, Calvin, and Zwingli and how they constructed their churches even while under the oppression of the Roman Catholic leaders, and in some instances, conflict with other Protestant churches. He also discusses how different countries responded to the Reformation during the 16th and 17th centuries. Protestantism was not an organization, so it had no authority to outline its doctrine while these churches were growing. Wylie discusses the theology of the churches and their different beliefs.

While Wylie is intent on telling the story of Protestantism, he - in many places - travels back to the Middle Ages and picks up the story and moves forward to the Reformation of the 16th century. When listening to the book, you can find that Wylie is thrilled to see just that men and woman stood for truth, and in doing so, made way for truth to prevail in the end.

Wylie's ability as a scholar and an author is apparent in every chapter. Anyone interested in knowing about the history of the Christian Church would be truly enlightened by referring to this work of Dr. Wylie on the history of Protestantism. His disposition to use the pen as a mighty "sword of the Loord" (Judges 7:18) is evident throughout this work.

The History of Protestantism is no mere history of dogmas. The teachings of Christ are the seeds; the modern Christendom, with its new life, is the goodly tree which has sprung from them. We shall speak of the seed and then of the tree, so small at its beginning, but destined one day to cover the earth. The History of Protestantism is fundamental for anyone who is interested in knowing how the faith broke with Rome and endured through its tumultuous first few centuries to become the religion that it is today.

James Aitken Wylie was a Scottish historian of religion and Presbyterian minister. He was a prolific writer and is most famous for his 24-book set The History of Protestantism, which was first published in 1878. Wylie died before completing his History of the Scottish Nation in 1890.

The contents of this audiobook include:

What listeners say about The History of Protestantism: Volume 1