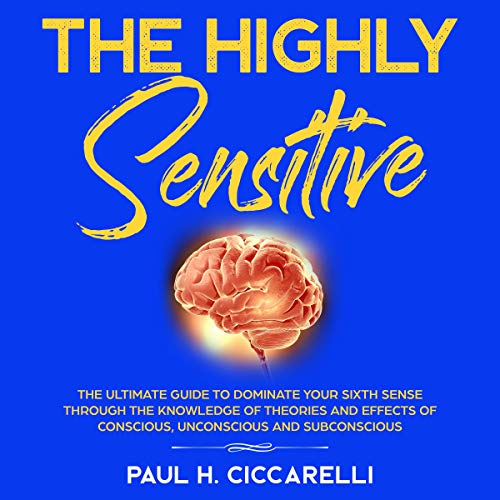 At present, many techniques have appeared with the help of which you can enter an altered state of consciousness, first of all: hypnosis, meditation, holotropic breathing, etc.

I offer a completely new method: "Trans analysis”, which primarily analyzes the conscious, unconscious, and subconscious processes of the psyche.

Currently, a huge amount of popular science literature has appeared on the subconscious.

Such as "The subconscious can do anything", which is completely far from reality.

The subconscious just cannot do everything.

However, understanding what it can do is a step closer to activating this sixth sense available to all individuals.

In order to get some information from the depths of our psyche, one has to resort to various complicated techniques, many of which do not help.

This audiobook - The Highly Sensitive - is a scientific field that studies the underlying processes of our psyche.

A huge role in this is the study of the subconscious.

Many researchers like S. Freud and C. Jung, studied consciousness and the unconscious, but very few pages were devoted to the subconscious.

I decided to close this gap by creating a trans analysis.

An analysis of these conditions is simply necessary to advance psychology in the front.

Here’s a sampling of what you’ll learn by listening to this audiobook:

So if dominating your sixth sense through the knowledge of theories and effects of conscious, unconscious, and subconscious is your goal, give this audiobook a try.

Get this audiobook now.

What listeners say about The Highly Sensitive

It is a great relief to discover this phenomenon. Not everything was true for me, but enough was true to make this book a revelation.

This has good information for a person who seems to have more feelings than others do. This book is recommended by me.

Thanks Audible For this awesome book

Excellent audio book! I highly recommend it for people like me that are highly sensitive as a way to better understand ourselves and deal with life better. Great strategies and explanations. Good to keep a journal while working through the audio book.

This book helps me better understand myself and my sensitive world of sensory processing. The author is very knowledgeable and succinct with the information provided in the book.

This audio book not only explains what a Highly Sensitive Person is but takes you clear back to your early childhood to self explore the why's and how's for you. It has been a great help for a better understanding of myself, and a audio book I am sure I will listen to again.

This audio book changed how I view myself existing in the world. It's an incredibly helpful tool for anyone who thinks they might be highly sensitive. It's making its way through my extended family, and everyone who reads it loves it.

Wow, just wow! I still haven't completed reading the book but have finished more than half of it. I have always struggled with being more sensitive to other people's reactions than most of the people around me and I couldn't quite figure out why. Listening to this book has certainly helped me understand myself a lot better and I hope to manage my cards better in the future. It felt scary at times though considering how true most of the things were.

Very intriguing listen, and helped me learn a lot about the personality type. I realized that though I do assimilate with most of the characteristics, I'm not totally an HSP like I thought I was. But still a very interesting read, got through it in about a day. The author does a great job of keeping the book grounded instead of it going over your head like most self help audio books tend to on their tangents.

I recommend this book

This audio book gives amazing tools to navigate life and I learned many helpful perspectives on how I approach social situations I could not handle before.

I liked this audio book a lot because I have always wondered why noises, movements, odors, cruelty to anyone, etc. upset me more than other people I was with and also that I don't like to be around people all the time but need to regroup inside myself.