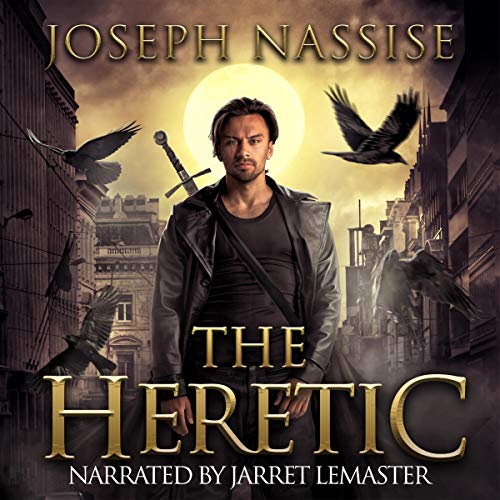 By: Joseph Nassise
Narrated by: Jarret Lemaster
Try for £0.00

Forget what you've been told. Monsters do exist. And they're hungry...Standing in their way are the men and women of the new Templar Order, who have pledged their lives to protect those who cannot defend themselves from the darkness and what lies within. Men like Cade Williams, an ex-SWAT officer turned modern Templar knight who commands the most elite monster-hunting team in existence.

When a group of necromancers seek to bend an ancient, mystical artifact to their own evil ends, it will be up to Cade and the men of the Echo Team to stop them.

The Heretic is the first book in the Templar Chronicles, an internationally best-selling series that's perfect for fans of Jim Butcher, Ilona Andrews, and Patricia Briggs.

What listeners say about The Heretic: A Templar Chronicles Urban Fantasy Thriller

I was given a free copy of this book, and I'm leaving an honest review voluntary.
I started this book not really knowing what to expect, but I was soon engrossed and I couldn't stop listening.
It's action packed with plenty depth. Such a great listen, the narration is flawless. The whole concept was extremely well thought out and delivered perfectly.
Giving nothing away I'll end this with its a book I'd deffinatly recommend.
5 STAR.

Very much enjoyed a very well written tale
The narrator, made it come alive wonderfully reD

I received a copy of this audiobook for review and here is my honest take on it. I was quite pleased with the narrators voice and the story. This is only book one of a larger story but it is awesome. If you like paramilitary and paranormal stories this is for you. It has a cohesive story that starts out quickly and draws you in. I don't want to give details because it would ruin the surprises in the plot. Just when I thought I knew where the story was going it changed direction a few times. It involves the military, templars and some magic. It also deals with the topics of faith, loss and anger in poignant ways. It is truly an original piece and I look forward to finishing the rest of it soon. Thumbs up!

Book 1 of The Templar Chronicles

I really enjoyed the narration on this story and listening to the words made me see a few scenes differently from when i read the book.

Anyone looking for a fast-paced thrill ride need look no further - this is it! The story, timing and narration are spot on and definitely will keep your mind riveted! Looking for the next!

Interesting book full of twists and turns. There is also lots of action from the very start. I wish there was a little more character development, but it is a good story overall

This was so amazing! I loved all the characters. Each seem to have a special ability that helps them in their mission. Throughout the story, you can feel the Lord is with them. I think that’s what I liked most. While they were always surrounded by evil and death, there was still the presence of the Lord’s power in whatever ability they had or weapon. I didn’t know it was Christian fiction. It’s also urban fantasy at its best. I felt so sad for the main character losing his wife. After all the years, he is still mourning her. I loved how the author wrote the necromancer and the things he did. I have to say, even though there were the elements of the Lord’s supernatural power, there was so much creepiness it was like the book is a horror novel. Stephen King has nothing on this author! Lol.

This has got to be the most incredible narrator! He has the most wonderful, creepy voice. It really brought the story to life. It was very fitting. Like the book was written for his voice. While he sounds scary, the voice is also very sexy. I know, I’m weird lol. I’m going to see if he does any romance books.

I read this book quite a while ago and enjoyed the story and the premise of the series. When I got the chance to listen to it I wasn't ready for just how much I was going to enjoy the story as it was brought alive by Jarret Lemaster's excellent narration. If you enjoy stories about the Knights Templar, magic/mystic occurrences and an ancient Christian relic or two, then this story should be in your to be read or listened to list.

A great novel by Joe Nassise and a very good narrator! I will definitely be listening through the next novels in the series. The organization of the Templars and the lore behind it mixed with some really good characters and back story definitely keep you interested!

Cabe Williams (the heretic) has no time for an extensive interrogation. He asks question and expect answers. When he did not get that, he kneecapped the prisoner, in both knees. That let’s you know right off he is a badass with an attitude. He can’t be bribed or tempted. Once given an assignment, he will not stop until it is completed. What makes his unit different, they work with the supernatural. They have seen the supernatural. They know/use unconventional methods not in the Templars’ bailiwick when required.

The author spends time to redefine the Templars to fit the story. Templars’ mission is to defeat mankind from supernatural threats and enemies.

• Knight Lieutenant Sean Dunken has healing properties, which he is reluctant to use. He is a by the book kinda of guy. He heads the preceptor’s security detail. He is arrogant, smug and has nothing but disdain for Cabe and Echo unit.
By the order of the preceptor, Dunken must work with Cabe to stop the destruction of the headquarters.

Yea Cabe kneecapped a guy, but like knights of old, he carries a big sword. I recommend this book especially if you like Templars or like to see the church fight the supernatural.

this story had been on my to be read for awhile so when I got a chance to listen to it I was all for it; it did not disappoint.