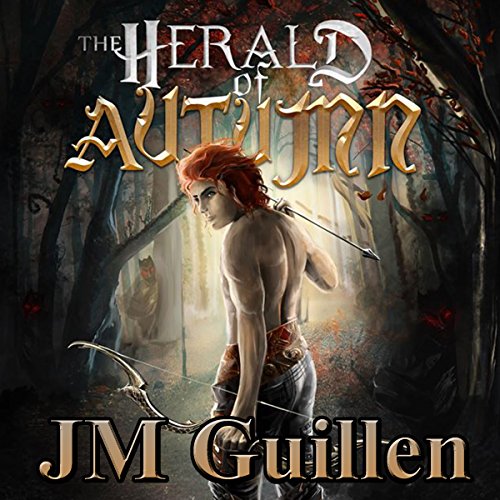 The Herald of Autumn

There are things unseen in the world of men, strange things that live in the secret cracks between places.

Fortunately, for the children of men, there is one who protects us from the darkness that we cannot see.

Every year, with the death of summer, Tommy Maple, the Herald of Autumn, awakens to again wander the land. Wherever he goes, red and golden leaves follow him, and he hunts the twisted creatures in the darkness.

This Autumn, however, is different from those in the past.

Tommy awakens to the taunting of a mysterious and elusive worker-of-wonders. Soon, a sinister tale unfolds- a story made from the whispering of forgotten legends that ends with a dark revelation.

A story that Tommy has always been part of, even though he didn't know it.

Far from the eyes of men is an ancient abomination, hidden from even from the Facility. As ever, Tommy pokes where he should not, and soon the hunter is the one that is hunted, chased through a misbegotten wood by a creature who seems to be little more than darkness and feckless hunger.

The behemoth is pure horror, and can unmake everything Tommy is.

As the Herald faces a foe unlike any other, will he fall to the darkness that haunts our world? Will the shadows of a lost age devour him, causing him to be reborn as one of the world's sorrows? Or can he trust the wonder-worker, a creature spun from little more than trickery, malevolence and deceit?

What listeners say about The Herald of Autumn

Intriguing and smooth. A nice fulfilling story. The beauty of the interactions of the characters and the world is truly breathtaking.

This was an enjoyable audiobook. The story itself is excellent, and if you're a fan of JM Guillen you will notice several common threads with his other books, which are all set in a shared setting of alternate worlds/rationalities. The Narrator does a good job of differentiating character voices; I never wondered as to which character was speaking. I would recommend this to anyone who enjoys urban fantasy, particularly with horror twists.

I enjoyed the descriptions of the Tellings, weaving magical stories whose events became true and influenced the world and its people. There's something appropriate about magical narrations changing the minds of those who hear it, especially as your mind's eye is envision the tale that that character, and the narrator is telling.

My favorite scene was the first physical confrontation between the protagonist, Tommy Maple, and the adversarial force of the story. It not only works as a believable fight (as believable as a battle between two fictional, magical beings can be), but the aftermath shows an emotional cost and the toll it takes on Tommy that I greatly appreciated.

The audiobook was particularly moving in sections, particularly as Tommy is forced to face the reality that he must always wander, never knowing a home, and watch as his friends and allies fade away. There is a sense of forlorn loss to these sections, palpable in the voice and tone of Rhett Kennedy's narration

Full disclosure - I was given a copy of this audiobook by the author for the purposes of reviewing it. I enjoyed the audiobook so much that I purchased the Kindle edition of The Herald of Autumn, and another of Mr. Guillen's books.

A fantastic book for the road

I definitely will recommend this book. I really enjoyed the story. So much so, that I couldn't listen to it at work without being distracted.

I really enjoyed the concept of this story. The mythology, the history, and the imagery really do come together.

I enjoyed the many voices. While you can tell they belong to the same performer, they are distinct from each other. Altogether, it makes a story told with a good flow.

The next time I go for a long drive I'm definitely going to re-listen, all in one sitting.

If you could sum up The Herald of Autumn in three words, what would they be?

Have you listened to any of Rhett Kennedy’s other performances before? How does this one compare?

I haven't listened to him narrate a book before but I was very impressed. I would buy a book based on his narration alone in the future.

This is a pretty short book so it was easy to digest in one sitting. That being said, even if it was a longer story, it grabbed me from the beginning so I would have found it hard to put it down.

I had the pleasure of reading this story before, so having received a download of the audio version in exchange for an honest review, I'll focus on the performance.

The reader was nearly perfect in capturing the particular voice and style of the title character as I envisioned him, as if a Celtic spirit of the wilderness were narrating his strange adventures. Moreover, he also does a flawless job with the other characters, whether Coyote on his epic odyssey of discovery or alien monstrosities whose language is madness.

The only flaw I could detect is that the pacing might have been faster during the action scenes, but the narration was perfectly suited to the instances of tale-telling throughout the book.

What made the experience of listening to The Herald of Autumn the most enjoyable?

The combination of the narrator's voice talent and the author's captivating tale made listening to this feel like I was listening to a tune played with words.

I enjoyed the way the author tells a modern faery story with such a beautifully lyrical quality.

I particularly loved the scene where Tommy interacts with Molly at her inn.

This book made my heart smile.

The print version is incredible, and was my introduction to this author. I've read it countless times, and wasn't sure how the audiobook version would be. It's unbelievable. It truly is storytelling at its very finest.

It was perfect for a St. Paddy's day story. You could on hear the horror portion if you listened closely.