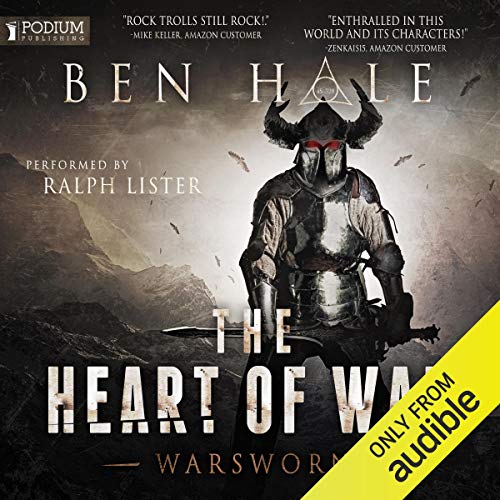 The Heart of War

King Tryton has rebuilt a nation, forged peace from war, and returned his people to the honor they had lost. Now guarding mages, guildmasters, and kings, the rock trolls inspire respect rather than fear. In spite of his feats, it is his family that brings him pride. He has trained his children in every facet of combat, preparing them for a world of conflict.

It will not be enough.

In the distant past another rock troll reigned supreme - until he disappeared. His will was bound to another, his flesh empowered with forgotten magic, and his body covered with impenetrable armor. Now he leads an army from another realm and serves the Lord of Chaos himself. Bound for eons, his rage has only grown in exile. When he gains his freedom the invasion begins.

And the world ends.

What listeners say about The Heart of War

just a great story may listen to it again . it does help if u have bot read the other books though

I love this book, having listened to the rest of the Luminea chronicles it was great to see the story unfold from another angle. I really connected with Triton such a strong character, love love love him!

The whole series of these books are brilliant and well worth listening to!! The narrator is brilliant and you loose yourself in the book really quickly.

Hahaha it really doesn't get much better than this great plot, great development, great everything!

This was a good book. the first and third books were the best of the series.

Devastated that I'm at the end of this series. One of my new favorite authors.

Who can even pull off battle scenes for that many chapters???? ahhh just amazeballs!

Also, Ralph Lister is one of my top audiobook narrators (why I purchased it in the first place). So awesome all around.

Excellent ending to this Trilogy

After starting with the Chronicles of Lumineia, I loved how this Trilogy filled in the blanks and provided background color. I will move on to Jack’s Trilogy and then re-listen to the Chronicles again. Just a very enjoyable listen. Excellent readers for these series!

Amazing book in an unforgettable trilogy

I have fallen in love with Ben Hale's universe. The Warsworn is exceptionally unique as it focused on one of Ben's most unforgettable characters.. Triton.. the King of the Rock Trolls. Once you start this trilogy you wont be able to put it down. If you are like me, you will want to read "Seven Days" while you enjoy "Heart of War" as they coincide the same time period. Lastly, Ralph Lister was the perfect shoice for this reading. I only wish he was chosen for the 2nd Draeken War as well. Derrick Perkins is good but at times can lull me to sleep after a long day. Overall I would recommend this Trilogy to fans who love getting lost in this genre as much as I.

The end is the best part!

The story fills in a lot of things that were not apparent in the original story and gives more life to a well developed world. Even if you read the second series, you will find that this book will expand upon the histories of the world of Lumineia, as well as give the ability to expand on favorites from the existing series characters.

I’m looking forward to seeing what else Mr. Hale has up his sleeve.

Ben Hale has created a story for the ages.

His world of luminea rivals that of Middle Earth. His characters are memorable and complex,

is a really good story great author and a great finish to the series..... five stars

this story always gets deeper and deeper. a fine listen. makes me really want more