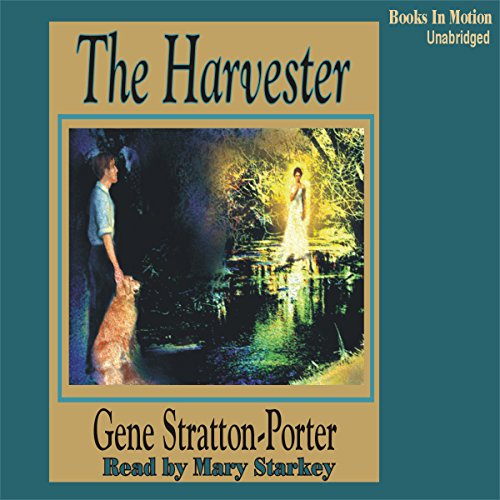 This is the charming story of David Langston, a young man in search of the woman of his dreams. She came to him in a vision and he knows he must find her.
©1911 Gene Stratton-Porter (P)1990 Books in Motion

What listeners say about The Harvester

Possibly My Most Unusual Listen Ever

An adult fairy tale? Adult, not as in X-rated, that is; it is as pure and clean as the main character, David Langston, the woodsman. I just kept thinking over and over, "How strange." Which is not to say I didn't like it. I listened all the way through, fascinated by the whole thing. Yes, you could say it was fascinatingly odd yet often beautiful!

First, I must address the narration. Mary Starkey seems like a very nice person, but I think she needs more experience narrating, maybe even more feedback or training. Her voice lacked expression and she read extremely fast. This is a very wordy book with much dialogue, which became all jumbled together due to the speed of narration and lack of pauses. It seemed the narrator was in a big hurry and just sped along, often not conveying the emotion or action. This, in addition to mispronouncing many words, words which are really commonplace. Over and over she mispronounced 'ginseng' to sound like 'GIN(hard G)-SING'. This herb played a big role in the story and the word was used over and over again grating on me quite a bit. Most other mispronounced words were used less frequently and not so bothersome. THEN, I never heard so many instances of pages turning and a chair creaking! Uncanny.

As for the story, as I wrote above, it was a fairy tale romance. Written by Gene Stratton-Porter (1863-1924). Her bio says she had 50 million readers and was translated into several languages. In this story, a young woodsman, naturalist type who makes his living off the land harvesting and selling leaves, flowers, roots for their medicinal qualities, debates the need for acquiring a wife. His dog finally tells him the time has come, yet he is somewhat disgruntled about dealing with the intrusion of a wife, until he dreams of the one and only girl he must have. Throughout the story, he refers to her as "the girl of my dreams" or "my dream girl". This is the story of his search for her and what happens when he finds her. The story is plentifully interspersed with descriptions of plants and flowers and birds, lots and lots of references to nature. I would imagine this aspect of the story could be considered to be beautiful, but like the rest of the story, it was sped through by the narrator.

This tale was very childlike and dreamy. Sometimes the author got carried away and it became downright strange, such as the part where the woodsman went on and on about the importance of a man being thoroughly clean.

The Harvester was a truly different listen for me. I don't even know what more I could say about it. I can imagine some listeners absolutely loving it, particularly fans of romance or young girls who dream of romance. I know I would have enjoyed it more with a better narrator, someone who took their time and allowed the listener to enjoy the unfolding of the story and its characters. I am rating it 3 and a half stars.

What a human should be.

Porter was a great writer. Today we would say young adult is the genre. I have been reading her books and those of her era since i was twelve years of age. Today I am eighty six and read them with pleasure still. They are meant to make clean healthy young people and they work!

I just finished listening to this last week. I loved, loved it. It's a very romantic story--a bit over the top in some ways--but lovely nontheless. It might not have been meant to be allegorical, but I think you can also read it that way. My second time through I found myself retelling this story with God as the Harvester and me as Ruth.
As another reviewer commented, the production quality is not that great. Several times I heard pages turning--which I don't think I've ever heard on a professional recording before. And Mary Starkey is not very expressive. But still, don't let that stop you from trying this wonderful story. By the end of it I really liked Mary's voice, and I'll be downloading Freckles (also read by her) next month. I've already listened to most of this book twice, and I think it's one I'll return to again and again.

Beautiful story of love and romance. And education of herbs and wild flowers. Well read also my reader

I have treasured this book for years, so what a treat to find it on Audible! The narration was good, though didn't flow well at times. It's the author's way of writing long sentences with botanical terms that may be the challenge. Yet, the settings come to life when descriptions of flowers and woodland creatures are so accurate.
More than that, though. I LOVE the story! The main character is probably too good to be true, but he dedicates himself -first to his work and then to his "dream girl". His expressions of creativity and love are pure; unadulterated; full. It is SO inspiring! He KNOWS real love. In real life, we can see glimpses of real love, and we can achieve REAL LOVE and happiness. How? In the words of the Medicine Man of the Woods, "live a clean life" so that the wealth of love and happiness may rightfully be yours!

This book is my all-time favorite novel. The narrator does an excellent job throughout the book, pulling the various emotions and personalities from the pages and bringing them to life. I listen to this at least once every year, if not more.

This was a wonderful listen. I thought the narrator was fine and the quality of the recording just fine. It is a lovely story, well told, well enough read, a pleasure.