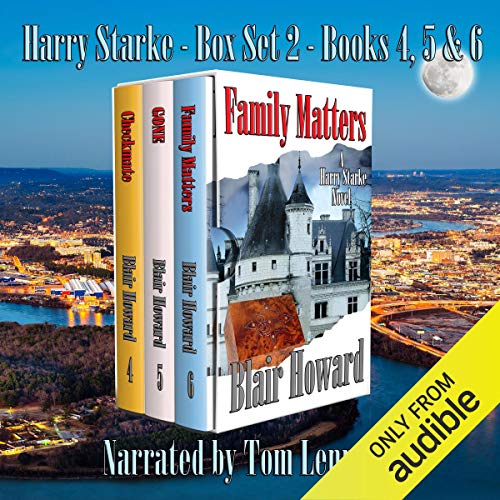 Books four, five, and six in the Harry Starke series of mystery novels.

Anyone who is a fan of Harlan Coben, Lee Child, or Tami Hoag will love Harry Starke. And they do. Thousands of copies have been downloaded. More than 200 five and four-star reviews. Now you can continue the ride with this collection full of murder, mystery, sex, corruption, and revenge, all the ingredients for three mind-blowing whodunits. From murder and corruption in Checkmate, to murder, sex, and alternative lifestyles in Gone, to the 100-year-old cold case in Family Matters, they will keep you listening late into the night.

What listeners say about The Harry Starke Series: Books 4-6

fantastic as always, the characters as so brilliant and the stories always gripping, can't wait for more xxxxxxx

I almost sent this back because the first part was nearly the same as Book 3 in the series. I stuck with it and it got really pretty good. I ended up enjoying the intrigue and suspense in books 4, 5, 6.

Would you listen to The Harry Starke Series: Books 4-6 again? Why?

Probably, I will certainly listen to more in the series. just downloaded the 7 - 9 books.

The formula works! While the plots vary all over the map (and all are clever)we now know exactly how Harry and crew will respond to all issues.

The narrator is Harry to me now. I can't imagine anyone else in the role at this point. All of Harry's charm and wit come through loud and clear.

What other book might you compare The Harry Starke Series: Books 4-6 to and why?

All the Harry Starke books.

What does Tom Lennon bring to the story that you wouldn’t experience if you just read the book?

He tells the story in a completely beliveable way.

Story line is predictable. No real surprises or twists. I do like them when I am at work as they don’t require a lot of thought and are entertaining. Don’t get me wrong, I have enjoyed them.

Why the comparison to Lee Child / Reacher ???

QUESTION: WHY is EVERY author/character compared to Lee Child / Jack Reacher (or Vince Flynn / Mitch Rapp) ?? Harry Starke is NOTHING like Reacher but both are great characters.

The best "Harry" comparison I know of would be Stuart Woods' Stone Barrington. Both Stone and Harry are wealthy and forever bedding beautiful women while dealing with assorted bad guys. Other than being "studly" and wasting bad guys, there is nothing like the laconic loner Reacher... nothing whatsoever.

I enjoy Harry, Stone and Jack... and Bosch and Elvis Cole and Lucas Davenport etc etc etc. The Legends of this literary genre are, of course, Travis McGee and Spenser.

If you like Harry Bosch, you will enjoy Harry Starke! I thoroughly enjoy this series. I can listen and still function in life... multi-tasking while listening. Nice job Mr. Howard! Can’t wait to start next 3 books.

CHECKMATE book 4 in HARRY STARK SERIES. Harry has an overload of cases, being a successful PI. Yet, when Kate an old flame of his, ask him to be a consultant on a case, and without pay. How can he refuse, even if no pay. Harry is part of the elite, country club , is known by most. People are either frighten of him , or impressed. Case : a young 29 year woman found on golf course, from a gentle murder. What is strange her husband died just a year ago, supposedly from a heart attack. Harry starts digging, there are affairs, drug, money laundering. twins. The list goes on, and the papers are stacking up. Who would benefit, and inherit. Another great page turner, and keeps you guessing to the end. A great read for all to enjoy.

GONE book 5 in the HARRY STARK. SERIES. The ex boss of Harry, the chief of police, wants to see him. Sounds like trouble. They had a bellicose relationship . But, curiosity wins. Chief's daughter Emily has gone missing. Emily now 22 was away at a prestigious college. How could the chief afford the 60K a year. Can't call for help up in Signal, for out of his jurisdiction.. Wants someone that will be discreet, and do the job right, which Harry does. Been a week and both Harry and the chief know the odds. What will Harry and Kate, she took vacation time, from her detective job, find out. A seedy bar, video tapes, did she leave with someone she knew, or a new friend. Another thriller packed adventure, that doesn't stop till the end. Clues mount as you try to figure out why. Great read, one doesn't want to miss this series.

FAMILY MATTERS # 6 in the HARRY STARK Series. For Amanda, the love of Harry has just inherited property, money, off coast of Maine. Thinking he almost lost her in the last case, with Mary shooting at them. Now this, no he didn't want it, and he couldn't, he employed a lot of people, he couldn't relocate. Not able to say no, he goes with her, to the reading of will, staying at the " towers". Something has come over Amanda, asking for sherry to drink, having terrible dreams., hearing a piano at night. The painting is over a 100 years, but looks like her. Only request to this inheritance " what happened to her great great grandmother. And what's with the puzzle box. Once again Harry the skeptic, yet, his reasoning and deductive will they solve the 100 year old cold case. A great puzzle, haunted house, we could ask for nothing more. Another great story

Entertaining Harry and his team

The books are fun, hold your attention . I enjoy his stories. Narrative and narration are great

A set of three interesting mysteries

This is a terrific box set with three great murder mysteries. Some of the content is rather disturbing, and there is a fair amount of sexual content, particularly in Gone, so it’s not for everyone. I listened to the audiobook of the set, and I would recommend it to those who enjoy the genre and are not put off. My personal favorite was Gone, and my least favorite was Family Matters which doesn’t quite fit with the series.

The narrator of the audiobooks does a good job bringing the books to life.

I received a complimentary copy of this audiobook, this is my honest and voluntary review.

Blair Howard writes the best mysteries I’ve listened to in a while. You will have trouble trying to out guess what will happen next.