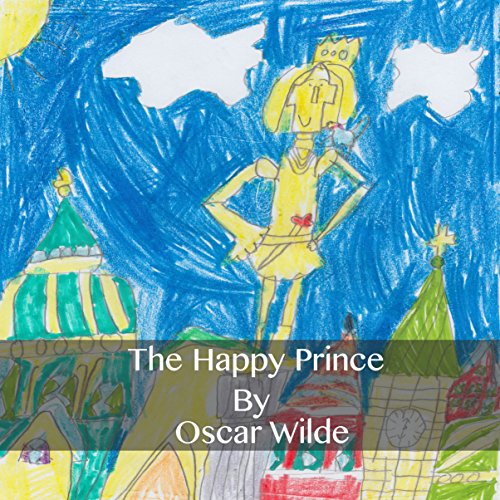 In a town where a lot of poor people suffer, a swallow who was left behind after his flock flew off to Egypt for the winter meets the statue of the late "Happy Prince", who in reality has never experienced true happiness. Viewing various scenes of people suffering in poverty from his tall monument, the Happy Prince asks the swallow to take the ruby from his hilt, the sapphires from his eyes, and the golden leaf covering his body to give to the poor. As the winter comes and the Happy Prince is stripped of all of his beauty, his lead heart breaks when the swallow dies as a result of his selfless deeds. The statue is then torn down and melted leaving behind the broken heart and the dead swallow which are taken up to heaven by an angel that has deemed them the two most precious things in the God’s city, so they may live forever in his city of gold and garden of paradise.

The Happy Prince and Other Tales is a collection of short stories for children, written by Oscar Wilde, and published in May 1888. Oscar Wilde (16th October 1854 – 30th November 1900) was a profound Irish writer and poet, writing in many different forms throughout the 1800s. He also became one of London’s most popular playwrights in the 1890s.

Athena Media is a multi-award winning transmedia production company led by award winning producer Helen Shaw. We create content for radio, television, online and mobile distribution. In 2014 Athena Media won 4 awards including 2 Gold Awards at the New Your Radio Festival. For more information on Athena Media, visit the website, and to hear some of our award-winning content click here.

What listeners say about The Happy Prince (Annotated)

A throwback to childhood

Would you consider the audio edition of The Happy Prince (Annotated) to be better than the print version?

It's a different but equally enjoyable experience.

What was one of the most memorable moments of The Happy Prince (Annotated)?

An old classic brought to life

Lovely to hear this marvellous story by the master, Oscar Wilde, recreated so vividly by the actor Michael Gallen. A very moving experience.

A beautifully sad tale about a 'Happy' Prince

What did you like most about The Happy Prince (Annotated)?

Michael Gallen's vocally warm, underplayed reading allows the narrative to shine through and the listener to connect with the words and the emotions - it's what good storytelling is all about.

It reminded me of a story I had long forgotten about and the brilliance of Wilde as, not only a writer, but as a social commentator as well. The simplicity of the telling - subtle music and sounds and a gentle reading - allowed me, as the listener, to focus on Wilde's words.

Michael's reading was beautifully straightforward - there were subtle vocal shifts as the characters changed and he seemed to let the words carry his voice - particularly in the swallow's descriptive passages about Egypt. Like any good seanachie, Michael just lets the story flow.

The moment when the swallow realises that he is going to die, but is unable to leave the Prince - have tears in my eyes just thinking about it.

I'm not normally an audiobooks fan - but if they could all be like this - I could become at least a partial convert.

A beautiful tale captivated by Michael Gallen's evocative and emotional performance. His narration is perfectly suited to this classic Oscar Wilde Story

Michael gallen does a sweet job of reading the story and I love his voices and the sound illustration and music in the piece ,