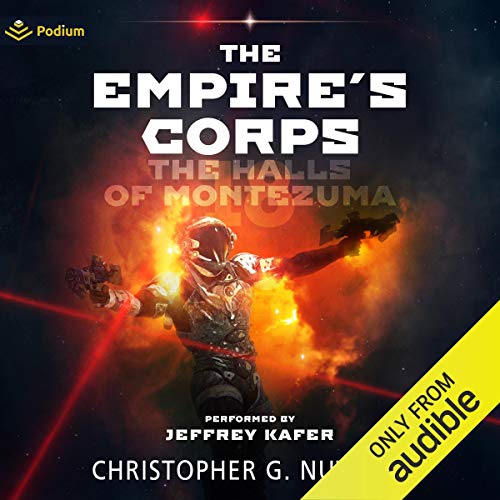 The Halls of Montezuma

By: Christopher G. Nuttall
Narrated by: Jeffrey Kafer
Try for £0.00

Earth has fallen. The Core Worlds have collapsed into chaos.

War is breaking out everywhere as planetary governments declare independence, entire sectors slip out of contact, and warlords battle for power. The remnants of the once-great Empire are tearing themselves apart. And in the shadows, the Terran Marine Corps works to save what little they can to preserve civilization and build a better tomorrow. But now they might have met their match.

The marines have beaten off a desperate attempt by the corporate worlds to recover Hameau, but the war is very far from over. The corprats remain powerful, gathering their strength to resume the offensive, locate the marines, and impose their society on the ruins of empire. To stop them, the marines will have to stake everything on a desperate gamble to tear out the heart of the enemy empire and slay the fascist beast in its lair.

But the enemy are equally desperate to win....

What listeners say about The Halls of Montezuma

This series is always enjoyable, I look forward to seeing how everything plays out.

I really like this series, however the "and yet" and "but" were out of control.

A glorious yet grounded future war

The halls of Montezuma Felt right as a depiction of war in the future. The entire series has been practical and incredibly well written. Exhilarating also.

A touch of Today’s reality

It is book 18, and it was interesting to have a futuristic story that ties today’s concepts into it. If you don't know about capitalism, well, it is alive and well in the future. Again, strangely enough, the misguidedness of today's corporate empire and governmental system is borough together well; they mirror our current anomaly.

I look forward to the next few books.

I love this series please keep them coming they are great. I love how large scale this series has become at the multiple story avenues it has explored. I’m so excited to have them begin to enter twine but each other sometime in the future