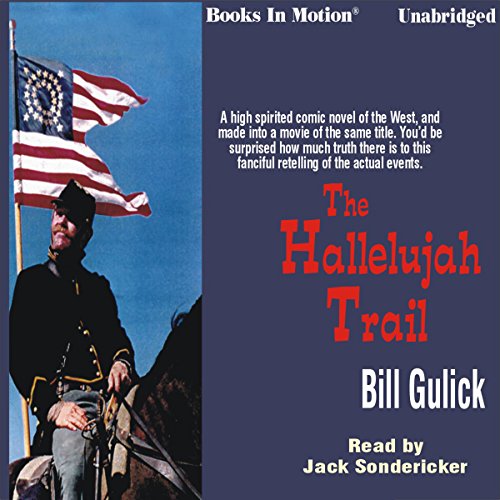 By: Bill Gulick
Narrated by: Jack Sondericker
Try for £0.00

Based on an historical event that, from start to finish, was a total carnival of errors, The Hallelujah Trail is one of the old West's most hilarious adventures.

In the late 1800's, a train of 80 freight wagons from Wallingham and Company left Julesburg bound for the mining camps at Denver, in the Colorado Territory. What is unusual is the 2700 cases of imported French Champagne and 1600 barrels of Philadelphia Whisky they carry.

Add to the tale several greedy Denver businessmen, a thirsty Indian chief and his warriors, testy Irish teamsters, and a band of self-righteous Temperance League suffragettes, and things get complicated for Thaddeus Gearheart, U. S. Army Colonel. The Colonel is charged with the security of the "secret" wagon train, and finds his hands full in dealing with a self-appointed frontier seer, Oracle Jones and his Citizen's Militia, the distraught freight owner Frank Wallingham, Cora Massingale on her temperance campaign, and Chief "Five Barrels" with plans of his own for the wagon train.

What listeners say about The Hallelujah Trail

I read the story years ago

I rather store years ago.
I love the way this guy reads it.
you bring feel alive and loses none of his humor