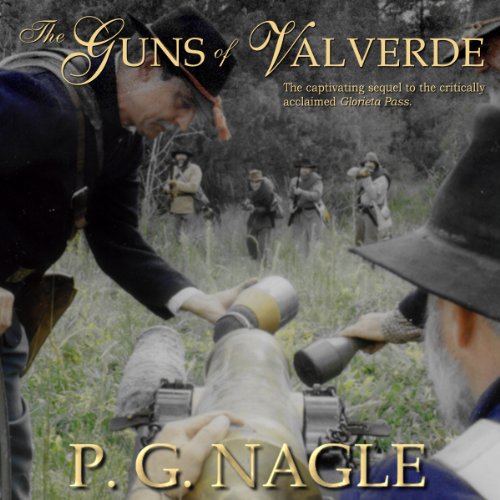 The Guns of Valverde

P. G. Nagle brings us this melodramatic saga of soldiers in the aftermath of a decisive Civil War battle. The Guns of Valverde is Nagle's sequel to Glorieta Pass. Raised near this area and still living in New Mexico, Nagle knows well the history and landscapes of her work. At times, the characterization may be thin or the plotting unwieldy; however, Jeremy Arthur's performance invigorates. With a dark but thoughtful tone, Jeremy employs his deep voice to hypnotize listeners. His pacing is like a heartbeat, varying from slow and steady to pounding. In this way, he builds drama and suspense with every calculated word. Historical fiction fans craving drama will take a liking to this Civil War saga.

The Texan Confederate army under General Henry H. Sibley, their supply train destroyed by the 1st Colorado Union Volunteers at Glorieta Pass, have only one prize remaining: a battery of Union artillery captured at the Battle of Valverde. The Texans, their force decimated, dispirited by the absence of fallen comrades, are determined to have some glory to show for their terrible losses. But standing in their way are Union Captain Alastar O'Brien and the Colorado Volunteers.

Young quartermaster Jamie Russell, wounded and taken prisoner by Union forces, devises a way to bring the guns to Texas. He escapes, convinces Sibley's brain trust to try his desperate scheme, and his plan becomes grim reality as both the Blue and the Gray are inexorably drawn into the deadly drama that is the Civil War. The captivating sequel to the critically acclaimed Glorieta Pass.

What listeners say about The Guns of Valverde