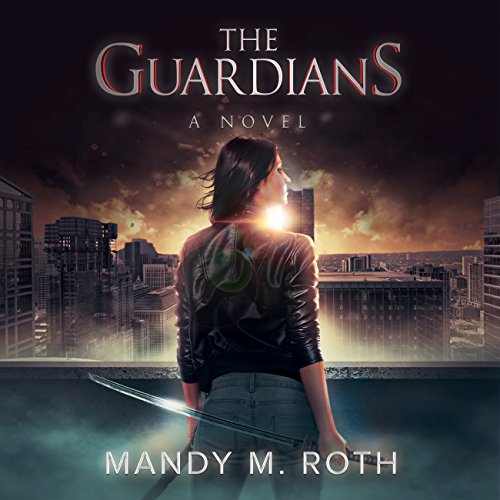 Ass-kicking Guardian, Madelyn Mason, is the only female in a sea of supernatural males. College student by day, she spends her nights fighting for mankind - the innocents, the ones who have no clue that the things of nightmares walk among the living.

Larger than life Hollywood hunk, Brady Devens, has won the hearts of millions of adoring fans. But, the only heart he wants to win is that of his mate, Madelyn. She hasn't shown an interest in him as anything more than a friend, and he's beginning to think the Powers That Be goofed.

In this world of magik, mishap, demons, gods, and pleasure nymphs, anything is possible. Can they find a love that transcends time and space or will the Powers That Be decide maybe they weren't destined for one another after all?

What listeners say about The Guardians

An interesting and enjoyable introduction to the Guardians in LA. With an endless array of secrets surrounding the main protagonists, the story twists and turns.
I really enjoyed listening to this book, as well as the intrigue and secrets, there is humour and a certain amount of pathos. I'm getting Book2 as soon as its available!!

What would have made The Guardians better?

Those are just annoying but the story just doesn't flow. Disappointed .

What was most disappointing about Mandy M. Roth’s story?

the narrator was a cross between a robot and a cheerleader. she wouldn't know inflection if someone read it to her. please stop reading out loud. as for the book, I couldn't really tell you. it seemed too stilted, lacked character development and interaction. the happily ever after was far too disney for me. this had good reviews on kindle though...

First, this has the bones of a good story. Unfortunately the outline got fleshed out... Badly.

To quote Harrison Ford, you can write this shit, but you can't say it. The author needs to read her dialog and figure out that a five minute conversation does not fit into a 30 second scene. This happened several times. The worst was during a battle two characters hold a serious conversation while the enemy are running at them. Apparently these werewolves run like arthritic grandmothers using walkers because the conversation drags on and on.

Speaking of writing fight scenes... The author needs to do some research. The fight scenes do not make sense from a logistics standpoint, as well as a results of damage.

And there are storytelling flaws. A lycan who is several hundred years old has no idea who the leader of all the Lycans is? Exactly how out of the loop is this guy? There are several flaws in the world building like this.

Characterization... The characters (other than the POV) are all centuries old, but act like teenagers. It's bad characterization for the sake of drama in story. There are better ways to do this.

Final point, the audible reading. This was just no good. The narrator paused in odd places that actually made it hard to understand what was being said. It felt like she was reading the novel for the first time. Very amateur.

I never quite know what I’ll get with a Mandy Roth title, beyond the smart-mouthed comments and some incredibly hot and sexy scenes, the layering of her characters with otherworldly traits, unique settings and inherent conflicts can be set anywhere: from real-world to outer space.

Madelyn and Brady are friends, roommates and absolutely adorable together. Madelyn is a guardian, protection of the innocents with her not insignificant fighting skills. Brady is the latest Hollywood hot thing, an actor that works for Madelyn’s father. The only person to know Mady’s secret – Brady is that stand-up guy that you want in your corner, and that is her main reason she isn’t willing to endanger the relationship that they had with sexual games. But they do, at first, dance to that cliff and back in nearly every interaction.

Not only is Madelyn the only woman in guardian’s history – it seems that everyone is keeping secrets from her. And as kick-ass as she is, and able to manage just about every challenge she faces in her efforts to protect the innocents, she just can’t seem to put all the pieces together.

And then, the revelations starting coming fast and furious- and here I thought Mady was a little ‘off’. Thinking she had to manage it all, and believing that those who ‘knew’ her secret didn’t understand her, when the pieces start to fall in for her, she is far too complacent in her reaction. A temper tantrum, some smart ass comments, even a few punches would have felt better for me. But, this led the story into the well-developed and still transforming relationship between her and Brady, and from the seriously palpable sexual tension that was unfulfilled, we move into some incredibly inventive and steamy moments with plenty of heat and action to spur the imagination.

Narration in this story is provided by Sarah Van Sweden. Her tone is pleasant and her speech is clear, and while the performance starts with only small modulations in tone and pacing to delineate each character, those changes became more pronounced as the story progressed and worked to smoothly set Brady and Madelyn separate from the other characters that were introduced. What I did notice was a decided lack of “performance” in the narration: concise and clear speech is necessary for the listener, but the tiny pauses as each single syllable and word is enunciated ( slowly – I – faced – them ) left me knowing that the text was being read. What that did was add a hiccup in the flow: I understand that careful attention to the written word is important, and clarity in speech is necessary, but the quest to not make errors (when they WILL happen) halts the natural flow of the narration. What I can say is that during the more action-heavy scenes, she does speed her pace slightly and the hesitations between the words seems to diminish slightly.

A fun story, this is a nice introduction into Roth’s work for those not familiar with her writing, and sure to please those who enjoy a paranormal fantasy romance with a bit of heat and a smart-mouthed heroine.

I received an AudioBook copy of the title from the author for purpose of honest review. I was not compensated for this review: all conclusions are my own responsibility.

Good book with a lot of the things I like; romance, action, humor, and drama plenty to keep me entertained. This reminds me of a sexier version of Buffy or Angel. A little unrealistic and a lot of drama, but fun nonetheless. The age thing was a little weird, since she knew all her boyfriends since she was a girl. The story was a bit choppy and would often jump to the next scene without any headway and it didn’t always make sense. I liked the characters and while I wasn’t always thrilled with the direction the story was taking, it was still fun. I look forward to ready more craziness from this author in the future. Narrator was okay, she talked a little fast but she was always clear and understandable.

I have no idea who could enjoy this book. everything about it is bad.

Would you ever listen to anything by Mandy M. Roth again?

The Narration sounds childish and wrong. Like extremely bad acting.

What character would you cut from The Guardians?

I tried to listen to this book twice and I couldn't pass the half way point. Pure torture.

Madelyn is a kick-ass heroine!

What made the experience of listening to The Guardians the most enjoyable?

I loved the banter between Madelyn and the rest of the characters. The nymphs were especially humorous!

Madelyn is a kick-ass heroine and I am excited to read more about her in the books to come. I love that she is humble, but not wimpy. She is strong, and yet vulnerable. Madelyn is smart, and oh so snarky. I love the snark!
Excellent start to a series!

While some parts are ok, I just truly felt like I was listening to Siri read me a story. The delivery of certain phrases just felt forced, and emotionless. While others were delivered with great emotion and inflection. I think the worst part was the inconsistency. It was a large detractor to the story for me.

Absolutely. I was angry when my life got in the way. Who needs things like sleep?!

If I'd paid more than the $.99 I picked this up for as the companion to a deal-of-the-day Kindle Book, I'd be asking for my money back. Just awful. The heroine is a Super Special Princess of Fabulous Powers Who Is Loved and Lusted After by ALL. The story is totally predictable and cliche'd. The writing was awkward and amateurish. The narration was bad...clipped and oddly paced. I did not finish after just over half of it; I got tired of rolling my eyes or yelling out "OMG...seriously??"

I don't recommend this to anyone and I'm completely gobsmacked as to how it gets the ranking it does here and on Goodreads...

What did you love best about The Guardians?

Brady. He waited along time for her.

Too long over eight hours but would have liked to.

A complex but good story of family, friends, colleagues, enemies with centuries of living, loving and protecting humans