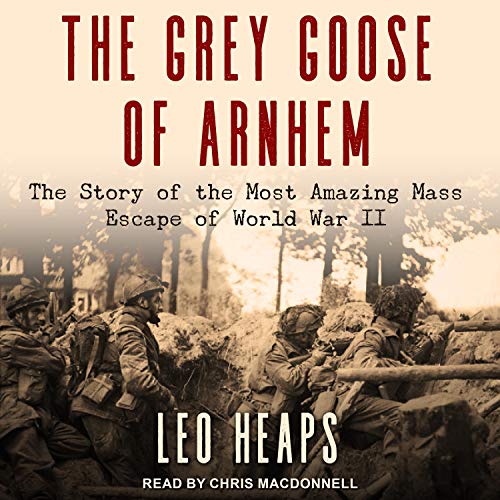 The Grey Goose of Arnhem

By: Leo Heaps
Narrated by: Chris MacDonnell
Try for £0.00

An account of heroism and courage in one of the Allies' biggest military catastrophes of the Second World War. Ideal for fans of James Holland, Anthony Beevor, and Cornelius Ryan.

Ten thousand Allied troops landed in the Netherlands in September 1944. This was the largest airborne invasion ever undertaken and it ended in utter disaster. Eight thousand men were killed, wounded, or captured during the Battle of Arnhem. Yet, what of those who escaped? And how did they manage it when surrounded by German troops?

Leo Heaps' remarkable book, The Grey Goose of Arnhem, charts the activities of 250 men who, with the aid of Dutch Resistance, made it back across the Rhine to Allied lines.

As a member of the First Airborne, Heaps draws from his own experiences as a soldier who fought, evaded capture, and then returned to work with the Dutch Resistance, for which he was awarded the Military Cross, as well as using material from private diaries, letters, and interviews with about 40 paratroopers and Dutch Resistance leaders to record a thorough account of the most amazing mass escape of World War Two.

What listeners say about The Grey Goose of Arnhem