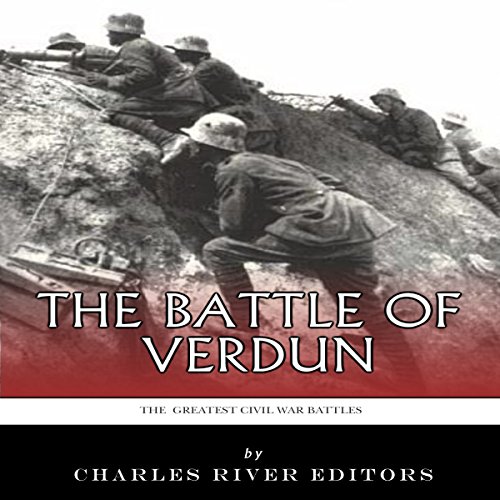 The Greatest Battles in History: The Battle of Verdun

The names of history's most famous battles still ring in our ears today, their influence immediately understood by all. Marathon lent its name to the world's most famous race, but it also preserved Western civilization during the First Persian War. Saratoga, won by one of the colonists' most renowned war heroes before he became his nation's most vile traitor. Hastings ensured the Normans' success in England and changed the course of British history. Waterloo, which marked the reshaping of the European continent and Napoleon's doom, has now become part of the English lexicon. In Charles River Editors' Greatest Battles in History series, listeners can get caught up to speed on history's greatest battles in the time it takes to finish a commute, while learning interesting facts long forgotten or never known.

It is difficult to overemphasize the importance of the Battle of Verdun. For the French, it possesses a grim significance which endures to this day - the churned, furrowed earth of the battlefield still visible a century later a stark reminder of waste of life, strategic failure and tactical inadequacy on a monumental scale. For the German people, had it not been eclipsed by the shame and horror of Nazism and the Holocaust, it would doubtless carry equal importance.

What listeners say about The Greatest Battles in History: The Battle of Verdun

The Batle to stay awake

What disappointed you about The Greatest Battles in History: The Battle of Verdun?

This is a dispassionate précis of one of the most important battles of the Great War.

Nothing by Charles Rivers Editors

A reader who sounded interested in what he was reading and drew breath between chapters might have helped.

If you could play editor, what scene or scenes would you have cut from The Greatest Battles in History: The Battle of Verdun?

I think I would scrap the whole thing and tell them to start again.

None of the colour and background that make histories by Beevor and others so interesting.

Would you ever listen to anything by Charles River Editors again?

Would you be willing to try another one of Richard Wayne Stageman’s performances?

I had hoped this would be a helpful brief overview of this historical tragedy, but the social and chronological contextualization is so perfunctory that it might as well not have been included at all. What you are presented with is a litany of military mumbo jumbo that might help a first year cadet at a military academy prep for a quiz on industrial siege warfare, but it is of little interest to the civilian reader. The reader is horrendous, mispronouncing words many Americans know how to pronounce, and interpreting the text with an awkward rising and falling of pitch--it is almost as if the reader thought the entire book was in French, rather an a few place and personal names. The worst book I have ever purchased from Audible.