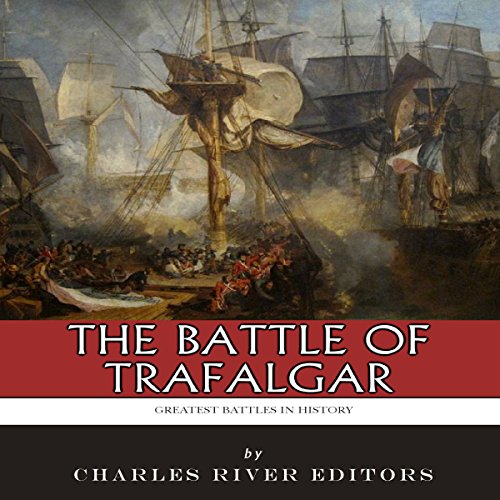 The Greatest Battles in History: The Battle of Trafalgar

By: Charles River Editors
Narrated by: James McSorley
Try for £0.00

Over the course of its history, England has engaged in an uncountable number of battles, but only a select few have been celebrated like the Battle of Trafalgar, one of the most important naval battles in history.

Before the battle Napoleon still harbored dreams of sailing an invasive force across the English Channel and subduing England, but they were dashed on October 21, 1805, by a British fleet that was outnumbered and outgunned. That morning Admiral Horatio Nelson's fleet, 27 strong, bore down on the Franco-Spanish fleet, approaching at right angles in two columns.

French Admiral Pierre-Charles Villeneuve's disposition was conventional: a single line of battle, ill formed due to the very light winds and the poor seamanship of many of the crews. Traditional naval warfare strategies called for approaching an enemy fleet in one line and then creating a parallel line that allowed as many guns to fire as possible. At the same time, that kind of line allowed admirals to signal during battle and made retreating in an orderly fashion easier. After all, if an enemy's ships pursued during a retreat, they would break their own line.

The problem with that strategy, as Nelson saw it, was that the ability to retreat made fighting a decisive naval battle much more difficult. Thus, at Trafalgar, he employed a completely innovative strategy. The British plan was to punch straight through the enemy line with two approaching columns of ships, which would cut the Franco-Spanish fleet's line into three parts, prompting a melee that they knew would capitalize on their tactical superiority.

By the time the Battle of Trafalgar was finished, Nelson had scored arguably one of the most decisive victories in the history of naval warfare.

What listeners say about The Greatest Battles in History: The Battle of Trafalgar

This book of the battle was very informative ,factual and educational. I thoroughly enjoyed this read.