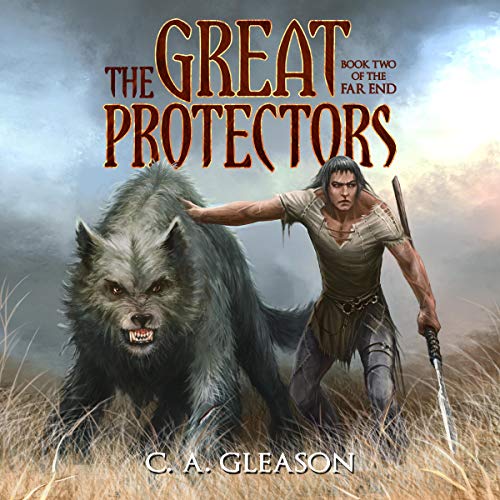 Vorik wasn’t supposed to be clan leader. That was a position meant for his brother, and their father before them. But nothing had prepared them to face down the tyrant responsible for so much loss. He thought the worst was behind them. He was wrong.

A devastating quake forces them to relocate, sending them right into the lands of seemingly invincible foes, forcing the warriors to make battle preparations against an enemy no one knows how to defeat.

Despite impossible odds, Vorik must find a way to defeat these new enemies. He might not have been prepared to lead, but he won’t betray the memories of those who led the Bullik-Braunzin Clan before him by failing them.

Everyone who understands the danger they’re facing are urging him to abandon their home and flee. Except, Vorik has never been one to run from a fight, so why start now?

What listeners say about The Great Protectors

...did everything i wanted it to. Helped me kill some time. If you like this sort of thing go for it.

The tyrant's reign is over!

After the long-overdue death of Deemuth, Boric needs to reinforce his ability to lead the clan. Of course, there are always those who would test him. After the earthquake that destroyed much of the village and the surrounding area, Boric decides it is time to move somewhere safer. Again, he finds resistance from the old ones who do not want to move for any reason. Ah, the trials and tribulations of a leader! Unfortunately, discovering a new territory reveals a new enemy. This new enemy is unfamiliar to the Bullik-Braunzin Clan and from the looks of it, quite vicious. Fight or flight? I was given this free review copy audiobook at my request and have voluntarily left this review.

This is the first book I’ve read/listened to by this author, and I’m curious enough to listen to book one of this series. I enjoy the fact the author has created a world with tribes and animals very different from what we have.
There are enough hints to allow me a basic understanding of what happened in book one, however this book greatly lacked descriptions of the various peoples, plants and animals. Some were described, but more often than not, the author introduced an animal or humanoid by name without explanation as to what they were or looked like. Maybe that was covered in book one?? Eventually some characteristic may be mentioned, but by then, I’d attempted to develop some kind of picture in my head and was unable, so I found it hard to stay consistently connected within the story. There is potential here!

This is the third book I’ve listened to by this narrator ( Mark Deakins ). So far, I’ve enjoyed each book he’s narrated. His narration style is good, and his female voices are well done.

I liked the setting and worldbuilding in this book a lot it was definitely an improvement over the first one as it was the characterization. I absolutely loved the different races and creatures that make the world feels like actual fantasy. Overall it was a great story and I will recommend it.

I received this free audiobook at my request and have voluntarily left this review.

It Keeps Getting Better

The Great Protectors is a pre-civilization adventure in with a small clan fights to survive and grow in a deadly world. While the first book in the series did have some shortcomings, this book showed much improvement. I absolutely love the world that Gleason creates in these books, the different races, the cultural dynamics, the utterly alien animals and ecosystem; this is what fantasy should be.
My biggest criticism of the last book was the lack of setting. While this book is much improved it could still use improvement. Especially regarding the many humanoid races, as I still could not tell you how there are different or if they are humanoid at all, at least with absolute certainty. Additionally, I was critical of the characterization in that last book, as the characters were not that distinctive nor relatable, this book is much improved in this area as well. While the characterization could still be better, it does not detract from the story. Overall, I’m really glad I gave this book a chance and I would likely read future books in this series.

I received a free copy of this book in exchange for an honest review.

Well written and well thought out story. The entire story held true to form. Good background was given to any expansion of the progression of this tale. The narration was done with great care and annunciation
I recommend this book to ages 12 and older due to some violence
I was given this audiobook for free, and I freely give my opinion.