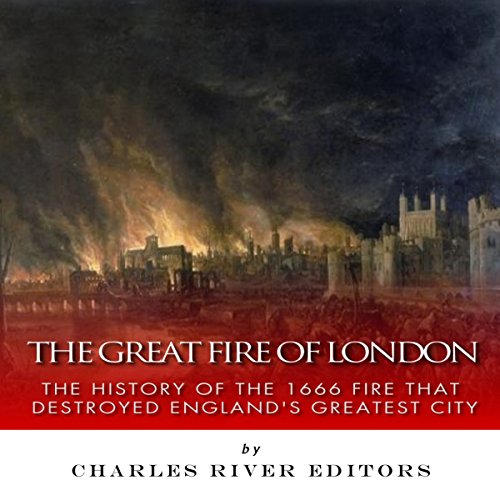 The Great Fire of London

By: Charles River Editors
Narrated by: Pam Tierney
Try for £0.00

"[A] wooden, northern, and inartificial congestion of Houses." - John Evelyn's description of London before the fire

"So I was called for, and did tell the King and Duke of York what I saw, and that unless His Majesty did command houses to be pulled down nothing could stop the fire. They seemed much troubled, and the King commanded me to go to my Lord Mayor from him, and command him to spare no houses, but to pull down before the fire every way." - Samuel Pepys

In the 17th century, the people of London could boast that they had developed some of the most advanced firefighting technology and methods in the world, including the use of primitive fire engines. There were even vendors of such machines who advertised in papers of their machines' abilities to quench great fires. Of course, even with trained firefighters and new devices, the most skillful efforts could still prove limited in the face of a giant fire, as Rome had learned over 1500 years earlier and as Chicago would learn nearly 200 years later.

In fact, one of the primary reasons London developed ways to fight fires was the fact that the city was particularly vulnerable. Although London was over 1500 years old and sat at the heart of the British Empire, most of the buildings were made of wood, and the city was overcrowded, in part due to the fact that city planners worked with and around the ancient Roman fortifications that had been constructed to defend it. As such, while there were spacious areas for the elite and rich outside of the city, London itself had narrow streets full of wood buildings that were practically on top of each other.

With some bad luck and bad timing, a potential disaster awaited the city, and that finally came in September 1666.

What listeners say about The Great Fire of London

One of my favourite interest of British history. Extremely poor narration. Facts unable to sink in to poorly written and told.

Poor - not aimed at a English audience

With a strong American narration, mispronunciation of many words (Southwark, Islington etc) and drawn almost exclusively from primary sources (esp Pepys diaries), I was very thankful it only lasted an hour.