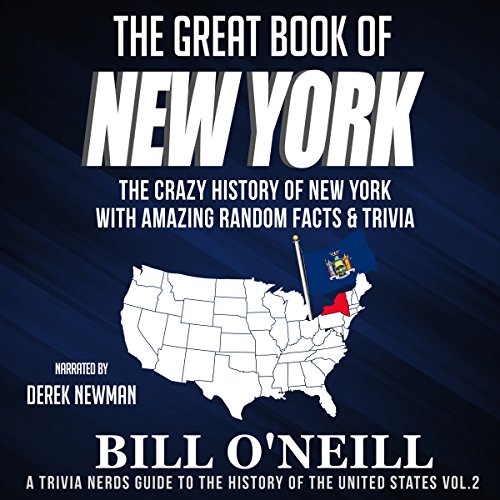 In The Great Book of New York, you'll learn the answers to the following questions:

It doesn't matter if you consider yourself a New York state expert or if you know nothing about the Empire State. You're bound to learn something new as you journey through each chapter. You'll be able to impress your friends on your next trivia night!

So, what are you waiting for? Dive in now so you can learn all there is to know about New York!

This was actually a pretty fun read. It was really interesting to learn new things about New York, from theatre to historical battles to the Statue of Liberty to sports. I really enjoyed it, and I loved the test yourself section at the end of each chapter.

An interesting and fun read

This Author has captured the Trivia space and does not disappoint with this Trivia Audio treasure.


As a New Yorker myself have always tried to learn as much as I can regarding
all aspects of New York.This Book required a great deal of research to even teach me a variety of facts I never knew.

In other words This well performed Audio Book can not only entertain you but educate you about this wonderful area.

First off, I'm an original east-coaster (now in Pacific NW) from Philly and have literally only set foot in New York once in my life LOL. This was great!! I loved all the info about a state I embarrassingly knew little about. Great trivia! A broad/wide variety of topics, all kinds of fascinating stuff! Love these books! Definitely recommend this book and all books by Bill O'Neill! :)
I was given this free review copy audiobook at my request and have voluntarily left this review.

I love these type books, but I was waiting to read this one because I was sure it would be 90% NYC and ignore the rest of the state, and I was right. It's enjoyable, but I feel like I knew most of it because the city gets so much attention. The other state books have been better.

Another great trivia book from Bill O'Neill, this time about NY. If you've ever been curious about New York then you should check out this book. This book is NY in a snapshot and quite entertaining. The narrator did a good job and read at a nice pace.

An Empirical study of the Empire state

Bill O'Neill returns to his American State series with New York, the 11th state to join the Union, but honestly not all that much is common knowledge of NY beyond just NYC. Thankfully, O'Neill spends a good portion of this text informing the listener of what exactly else goes on in the Empire state, beyond just the Big Apple. O'Neill spends time on pop culture, famous figures, events and pastimes that all got their start (or their big break) in NY.

**At my request, I was provided with a promotional copy, and have voluntarily left a fair and honest review**

This is the fourth book I’ve read/listened to by this author and I would love to continue to listen to each book he writes. The information he covers is broad and interesting. I never knew so many things were invented or done for the first time in New York.
This book has a bit of a change, if I remember correctly. After each chapter, there is a segment of question and answer. The questions are asked with multiple choice answers, and now the answers are given after all the questions have been asked.

This is the third book I’ve listened to by this narrator (Derek Newman) and I would listen to another. He does a great job reading these books.

I enjoyed learning about some of interesting facts and history about New York. I have visited often and now feel as if I have more respect and knowledge for the state and its history. This is a quick read, which was great and the narrator did an great job as well. I noticed that this author has a collection of "fun fact" books and I intend on listening to those as well


This audiobook was provided by the author, narrator, or publisher at no cost in exchange for an unbiased review courtesy of AudiobookBoom

The Great Book of New York: The Crazy History of New York with Amazing Random Facts & Trivia (A Trivia Nerds Guide to the History of the United States 2) by Bill O'Neill was a good read. As a native New Yorker, I loved reading this book of interesting facts about the state that I live in.This was a great read.

The Great Book of New York - Another trivia book filled with those useless bits of info we all love to quote.
I have read/listened to a few of this authors books and all are good and you'll always learn something.
Easy to listen too format.
I was given a free copy of this audiobook at my own request, and voluntarily leave this review.