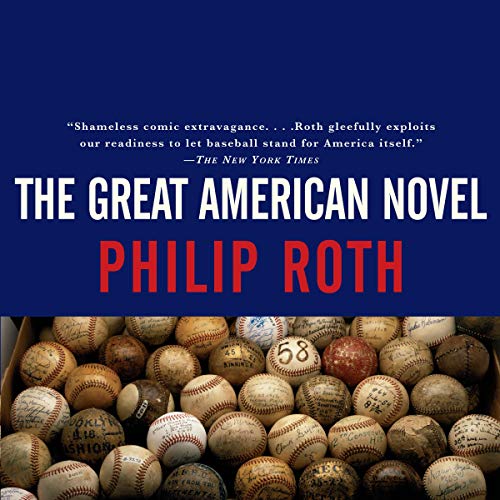 Gil Gamesh, the only pitcher who ever literally tried to kill the umpire. The ex-con first baseman John Baal, “The Babe Ruth of the Big House,” who never hit a homerun sober. If you’ve never heard of them—or of the Ruppert Mundy’s, the only homeless big-league ball team in American history—it’s because of the Communist plot and the capitalist scandal that expunged the entire Patriot League from baseball memory.

In this ribald, richly imagined, and wickedly satiric novel, Philip Roth turns baseball’s status as national pastime and myth into the occasion for unfettered picaresque farce, replete with heroism, perfidy, ebullient wordplay, and a cast of characters that includes the House Un-American Activities Committee.

"Roth is better than he's ever been before....The prose is electric." ( The Atlantic)
"Shameless comic extravagance.... Roth gleefully exploits our readiness to let baseball stand for America itself." ( The New York Times)
"Roth invents baseball anew, as pure slapstick.... An awesome performance." ( The New Republic)

What listeners say about The Great American Novel

I hadn't seen my copy in a few years and the start of the baseball season made me want to re-read Philip Roth's great comedy/satire The Great American Novel. This book has long been a favorite, but I hesitated when I saw there were only two ratings totaling a measly 2.5 for the ribald classic. If you are a fan DO NOT HESITATE - James Daniels narration is fabulous - acting out each character and bringing them to life. He had me laughing out loud a few times - this may not be one to take if you're thinking of getting back on a plane or train anytime soon (of course the book isn't, either). I'm going to search out his other reads.
Look - it's 2021 - this book was not politically correct when it was published 50 years ago, though Mr. Roth is an equal opportunity offender. Every listener will find something that causes them to say "This could never be published today" - followed by "He really was one of America's greatest fiction writers." This may not be THE great American novel, but it's great baseball fiction AND VERY FUNNY. If you're not a baseball fan AND have no knowledge of its history or love of satire and the absurd, it may not be for you. This is Roth's love letter to the game and also another chance to dissect America's social mores. A ton of fun, but remember it was written 50 years ago.....and the main character is a rambling old man looking back at the 1930s and 40s. Kudos again to James Daniels for his narration.

Not Roth's strongest but mindboggling performance

Because I've never been a baseball fan, I'd been putting this novel off for, yes, decades. When I uncovered my now yellowed and unopened paperback, I thought, "Do I really want to read this?" Then I figured I'd check to see if it was an audiobook and promptly ordered it.
The book itself is not up with the dozen or so "classic Roth" that merit him a long overdue Nobel Prize but certainly should not be overlooked. And, right upfront, you will never, but never, encounter a performance like that of James Daniels. You could never deign to call it a "reading." Daniels virtually becomes each character, dozens of voices, accents, styles. I really didn't want it to end and it was Daniels, more than Roth, that made me feel this way

This is great book not about baseball, except as metaphor.. But it will be wildly appealing to baseball fans. Set in the fully realized Patriot League, rival of the American and National leagues, it’s a kaleidoscopic allegory of the victimized Poet Rupert Mundys, a team doomed to wander the league in road gray when the unscrupulous owners sell their home field to the War Department at the start of WWII. The narrator is a classic old time sportswriter who chronicles the team’s and the league’s glorious history and ignominious demise. The story hilariously plays out within the overall dislocation of wartime USA and culminates in the political paranoia of the ‘50’s. Roth creates a complete fictional world fully inhabited by a colorful cast of broadly drawn common men. Tragically, despite trying their level best, with their meager gifts, they are manipulated by unseen forces beyond their control...and disappeared from American History.

A good farcical novel, but expect more from author

I'm guessing Roth took the theme of baseball as metaphor for life and ran with it. This is, basically, the story of an absurd baseball team and the absurd characters who play for it. The structure is episodic and there's no central protagonist. The writing's clever, but, as mentioned in the headline, one expects (and almost demands more) from Philip Roth. If this were the thesis of an MFA student, I think I'd have rated it higher. Alas, this is the work of a major author well into his writing career. I'm willing to admit I missed the point of the novel, but to me, this is just a trifling story that is much too long.

On the surface, the book is about baseball. Not the real game, but a game where people throw 150 miles per hour and a one-handed batter hits a home run. In other words, completely unrealistic. I'm not sure how non-fans of the game will react to this. I'd advise people to read other Roth novels first and then come back to this one only if you want to read his complete works.

Would you try another book from Philip Roth and/or James Daniels?

I have always viewed Philip Roth as one of the greatest living American authors but Roth must have been on crack cocaine when he wrote this book many years ago. Even the greatest authors sometime write a stinker and this is Roth's. Ouch!