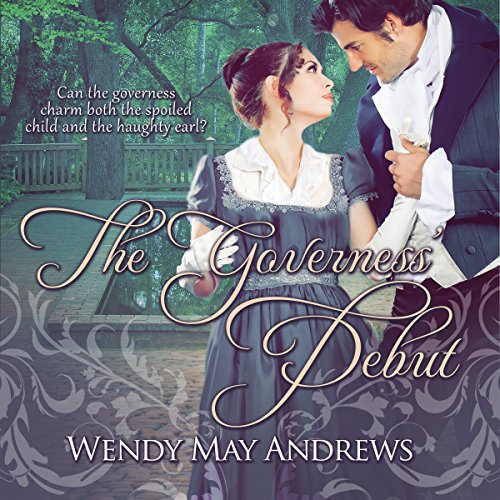 By: Wendy May Andrews
Narrated by: Eugenie Watson
Try for £0.00

After her parents died in an accident and her brother gambles away her inheritance and dowry, leaving her to fend for herself while he runs off to the colonies, Miss Felicia Scott must find a way to keep a roof over her head. No longer able to enter the Marriage Mart but certainly not of the servant class, the only option is to find a position as governess.

Her luck finally turns when an acquaintance refers her to the haughty widower Lord Victor Astley, Earl of Standish. His spoiled, seven-year-old daughter has been through three governesses in the 18 months since her mother died. The earl is highly doubtful the young, inexperienced Miss Scott could possible manage his irascible daughter but, since he is desperate, he agrees to give her a chance. Much to the astonishment of the entire household, Felicia succeeds beautifully, bringing the little lady under control and brightening the lives of everyone she comes in contact with, including the jaded earl. Will her joyful spirit be able to finally melt his resistant heart?

What listeners say about The Governess' Debut

What made the experience of listening to The Governess' Debut the most enjoyable?

The vocal performance gave depth to a book that was short and somewhat shallow in character development and plotting.

If you’ve listened to books by Wendy May Andrews before, how does this one compare?

I am unfamiliar with Wendy May Andrews' work. I noticed historically inaccurate language/speech, but it didn't distract from the plot.

Have you listened to any of Eugenie Watson’s other performances before? How does this one compare?

I really enjoyed Eugenie Watson's vocal performance. She brought the characters to life with consistency, painting pictures for me with her voice. This is the first of her performances that I have had the pleasure to experience.

I liked the match making mama aspect, especially since it was the Earl's mother pushing them together. I thought the ending came rather abruptly, with minimal conflict or angst, and no satisfactory grovel to back up the Earl's declaration of live.