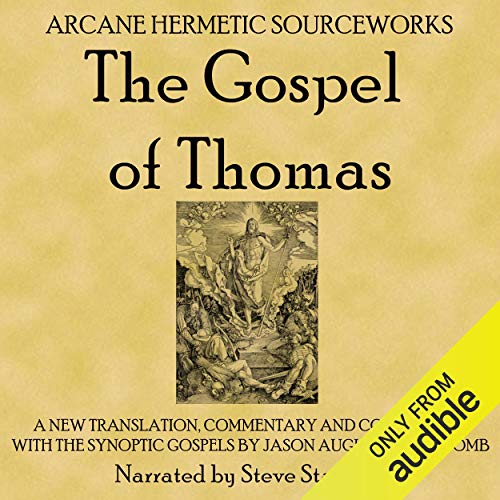 The Gospel of Thomas

By: Jason Augustus Newcomb
Narrated by: Steve Stansell
Try for £0.00

The Gospel of Thomas is a non-canonical scripture dating back to around 50-100 CE that was found near Nag Hammadi, Egypt in 1945 CE, buried in a clay jar with many other documents, all in Coptic, that collectively came to be known as the Nag Hammadi Library of Gnostic texts. A few fragments of the Gospel of Thomas in Greek had previously been found in Oxyrhynchus, Egypt at various times between 1897 CE and 1905 CE.

This text bears very little superficial resemblance to the traditional four gospels found in the modern New Testament. Thomas a collection of sayings attributed to Jesus. It contains no linking narrative whatsoever, and very little context for any of the sayings. The words are somewhat similar to those found in Matthew and Luke, a few in Mark, and one or two parallels in John. But the tone and the message of the teaching is often strikingly different. Most of the sayings are clearly mystical instructions. They are lessons in how to contact divine consciousness directly. This book clearly compares each of the sayings with its counterparts in the traditional gospels and points the way to a deeper understanding of all of these ancient texts.

What listeners say about The Gospel of Thomas

Too much commentary interrupting the source material

The author doesn't just provide the Gospel of Thomas as the title would suggest, but mixes each saying with the related passages in the canonical gospels so that it is very difficult to keep straight which parts are actually in the Gospel of Thomas. He feigns objectivity in his opening about the possibility that these sayings were either the Q gospel or another source that the canonical gospels referenced, but most of his comparisons are aimed directly at making the argument that they are. He states that he understands that Gnosticism is a false frame that was created by orthodox believers to brand non-canonical works as heretical, but every interpretation he gives for the sayings seems to be based from within that frame. If you want commentary Elaine Pagel's work is better, but unfortunately she exclude's the sayings altogether. If you just want to know what the sayings are in Thomas without having some individual's notes drowning it out, this isn't what you are looking for.

I can understand some commentary and a brief explanation at the beginning of a book, but it goes on and on throughout the entire reading of the book, where you cannot even get a grasp of your own opinion of the writing itself. It's a shame that it was done this way. Definitely regret getting this title, it should be called opinions & thoughts on the Gospel of Thomas, very misleading the way it is.

Good Translation & Comparison with other Gospels

I have read that some reviewers object or are disappointed at the side-by-side comparison of this translation of Thomas to similar verses in the other four Gospels. I appreciate the comparisons. I feel that the author, by doing so, is presenting Christian teachings in a similar fashion to how 1st and 2nd century and later followers of Christ (up until its formal exclusion from Christian writings) would have had the materials available to them. I feel that Gnosticism does not remove the spiritual portion of Christianity. Instead, Gnosticism also prompts the Christian to think, ponder, study, and thus develop a deeper understanding of Christianity - more so than simply accepting Jesus as Christ and perhaps following the doctrine of a particular Christian denomination. Gnosticism does not force a student of Christianity to discard any doctrines of their own personal beliefs - instead, it allows for a deeper understanding of Christendom.

The Message is Unfiltred! Excellent!

A very honest presentation with no hidden agenda! I see why the Synoptics did not want this in their Bible of editting! We found this 1500 years later! Well done!!

Just wanted the Gospel of Thomas

I was just looking for The Gospel of Thomas. I didn't want the commentary. Oh well.

I chose to read this after listening to the audible version of 'Jesus - A New Vision'. This gospel and the gospel of Mary Magdalene we're both mentioned as references to a deeper understanding of who Jesus was.

Actually the book by Whitley Strieber changed my life and put me in a direction that I have now decided is where I'm supposed to be for the rest of my years. I highly recommend both his book and this Gospel of Thomas rendition. I'm now moving on to the gospel of Mary Magdalene.

Great story, but read the entire Gospel of Thomas by itself at least once without the constant footnotes and comparisons to canonical texts. Everyone is desiring to hear Thomas, 'Thomas' gets drowned our by the constant comparisons with known texts. It's a bit daunting to listen to and loses the feel as a cohesive text.

I was looking for a book that had someone knowledgeable in studying the gospels to give me a deeper meaning on the gospel of Thomas. This one seems like the author is simply reading the text something I could have done myself. I found the audible book Beyond Belief. The author is a historian who had studied history of Bible, knows how to read in Greek and is able to give that deeper meaning I was looking for. I refunded this one and exchanged for that one. She also compares Tomas to the other gospels, which I like because it keeps giving me that deeper meaning I was looking for. Hope this helps. PS this author also compares to Matthew, Mark, Luke & John, but again, he provides no deeper meaning. It’s as if he’s reading Tomas word for word and the Bible word for word with no deeper commentary.

A Lot of Back and Forth

As others of noted, the book is not a straight-through reading of the Gospel of Thomas, but rather it is broken up with comparison and commentary. Would not mind if the author's analysis was reserved and presented after the actual text, but the constant back-and-forth between this Gospel and the synoptic Gospels combined with the author's interspersed comments make it somewhat confusing and difficult to follow. A straight-through read would have been much preferred.

Too much political correctness

I was offended by the amount of political correctness, for example the use of phrases "common era" or "he or she."