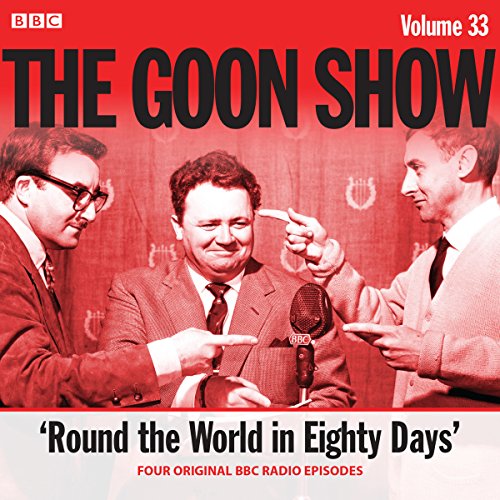 Goon but not forgotten! One of the most popular and influential comedy teams on radio, the Goons ruled the airwaves between 1951 and 1960. Their innovative, irreverent humour, inspired lunacy and surreal clowning, set the trend for a new kind of comedy, and their legacy continues to endure today.

What listeners say about The Goon Show: Volume 33

Brilliant work remastered from the 50's. The quality is about like an old Red Skelton show & as good as it gets. You will have to adjust volume for the music. Expect the old distortion and squeaks occasionally. It's still better quality than the free 'meditation' offerings from audible, which ring and hiss like cheap MP3s. In this case, the recording is about as perfect as possible. If you are a Goons fan, these are rare and some are previously unreleased, and should be quite enjoyable...

If you don't know the Goons, this is a decent place to start, as the show is well established by this point, but not like the end where the audience sometimes shouts the punchline. A new listener must be prepared to be confused. It's okay to be completely lost and not understand, as they make sense once you get an ear for their abstract comedy & funny accents. The Goons are like Monty Python on radio, so expect common tropes. If you like trying to understand the philosophical comedy of Python, this is where it mutated from Vaudeville to silly goonish madness, and the shows that mostly inspired Monty Python to be so zany.

The humor is genius and well worth many listens. The Goons are quick and don't wait for the audience. Peter Sellersgoon comedy is often faster than the laughs, if brilliant. Spike Milligoon is brilliantly dumb, the odd philosopher & head writer. Ned Seagoon is the every-man with a hero's voice, often the butt of the gags. The combo is genius. They often remind me of Red Skelton Junior sketches. Blue Bottle being like a more grown Junior, and Eckles like Klem Kadiddilehopper.

There are plenty of old Vaudeville jokes. They were fun for the audience to repeat, and the Goons always add flair with minor changes, to keep them on their toes. Be prepared to hear old jokes as a staple. At one point the audience joins in for a round of the new song, "Lightning Alopecia" to the tune of Alouette. It's hilarious to begin with, but it's hard to believe the crowd catch on so quick. They too, are funny and a great crowd most nights.

The Goons say they are about one thing: Making people laugh. As post WWII fears set in, the Goons were there to lighten the mood. Prince Charles himself does a cracking good Blue Bottle impersonation. The Royal family loved the Goons. There is historical value in learning just why such an anti-establishment group could become so beloved by a nation and the world.

Ray Ellington(g) is an incredible musician in his own right, and always does a nightly cover song. Some songs have dissipated and are worth historical fascination alone. Other songs are amazing renditions of favorites. His bluesy voice introduced the British to a lot of American music, especially that of the oppressed jazz artists, making them better respected in Britain than America at the time. Ray is a hero of civil rights. The Goons put his music on the air and it worked perfectly. Ray is also a VERY good actor and comedian in his own right, but often in the racist roles, so remember it's the 50's and less racist than the majority of shows at the time, often doing ironic bits based on other more suppressed African's. It's important to remember the comic irony is meant to bring light issues and to fight racism, not to be racist. It's also better than a European playing an African, even if it is a cannibal headhunter stereotype which never really existed.

Max Geldray's harmonica is brilliantly played but is never really recorded well. The Mastering on the sound needs volume normalization. One must turn these down or get ear damage. It's the worst thing about the recordings, but still not too bad. He is really a talented guy and some sings sound great, but most recordings don't do his ability justice. Max seems to be able to play anything. His acting is hilariously awful, but they know that and use him for jokes.

The extras are insanely detailed and meant for serious historians more than fans. There is a small dictionary of sound effects, there are failed joke outtakes, there are musical warm-ups. These make me miss the stage acting life. Many complain about these, but to some of us they're treasure. If you don't enjoy the ambiance of the stage, skip it. The interviews are fantastic. One really gets a feeling for how it all worked. It's amazing how from utter chaos comes a (mostly) comprehensive show. It's amazing to see what they tried and they recorded ahead of time due to difficultly. This is before digital audio, before CDs, and they had to make records for sound effects. The extras are historical record more than for regular listening. It can be a bit dry, but I still loved it.

I can't recommend these shows enough, but it takes a certain type to get it. MY GF admittedly hates the Goon show and can't understand it. She wants subtitles for a radio show. But that's normal. One cannot expect to understand the show even on the 10th listen sometimes. Jokes are sly, and you have to do a little thinking. However, that doesn't stop Eckles from getting a cheap laugh on a funny voice, or keep Neddy from falling into the water. There is something here for everyone once you get through them a few times and the voices become familiar. Smart comedy here. The Goon Show makes me happy and that is invaluable.