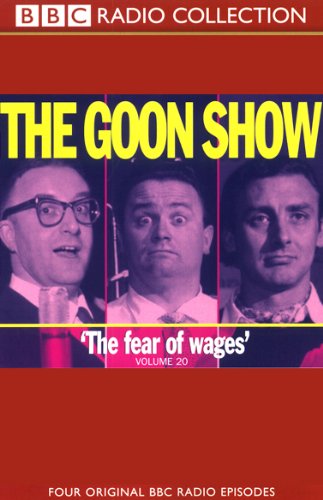 Goon but not forgotten. From 1952 to 1960 the Goons ruled the airwaves, the most celebrated and influential clowns in the history of radio.

GO ON, join Commander Seagoon and the Fourth Armoured Thunderboxes as they fight on (well, blunder on) in Burma; help Lord Neddie combat the dreaded Nadger Plague; man (and Bluebottle) the barricades as Citizen Ned leads the revolution; and avert your eyes as Nude Ned of Wales bares all in the Sahara. It's hot stuff, folks.

Yes, it's the all-leather Goon Show (now available in half-pint bottles) with another cult quartet of timeless wireless wizardry from Peter Sellars, Spike Milligan, and Harry Secombe, and their alter egos Bloodnok, Moriarity, Eccles, and the rest.

And why is that gas stove wearing a hat? It's going out.

What listeners say about The Goon Show, Volume 20

Goon with the wind

At last, the Goons are on Audible.com. I've got most of this stuff on my old steam-driven audio cassettes, but will now re-purchase the lot. For those of you who already know the Goons ... 'nuff said. For those who are unfamiliar with the works of the true masters of comedy, please download any one of the files to try out, settle back with your headphones, and experience the magic. Your life will be changed. Your parents/spouse/partner/siblings will probably send you to a shrink after a few weeks of listening to this stuff, but, hey, who cares?

the goons are always great, when's audible going to get 1-15?