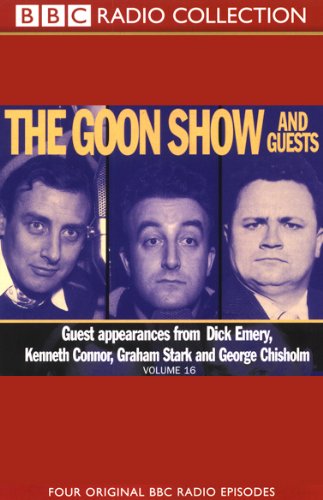 Goon but not forgotten. From 1952 to 1960 the Goons ruled the airwaves, the most celebrated and influential clowns in the history of radio.

GO ON and savour some of the special guests as Dick Emery, Kenneth Connor, Graham Stark, and George Chisholm get in on the Goonery. Follow their fortunes as they trace the dreaded Spon, go bagpiping playing in the South Pole, march off to war ("Name your weapon", "I name my weapon Basil"), and attempt to find a cure for Neddie's poverty stricken wallet.

They've found an apple. Their search is no longer fruitless.

What listeners say about The Goon Show, Volume 16

Goon, but not forgotten

At last, the Goons are on Audible.com. I've got most of this stuff on my old steam-driven audio cassettes, but will now re-purchase the lot. For those of you who already know the Goons ... 'nuff said. For those who are unfamiliar with the works of the true masters of comedy, please download any one of the files to try out, settle back with your headphones, and experience the magic. Your life will be changed. Your parents/spouse/partner/siblings will probably send you to a shrink after a few weeks of listening to this stuff, but, hey, who cares?

I love the goons

you just can't go wrong with the goon show!