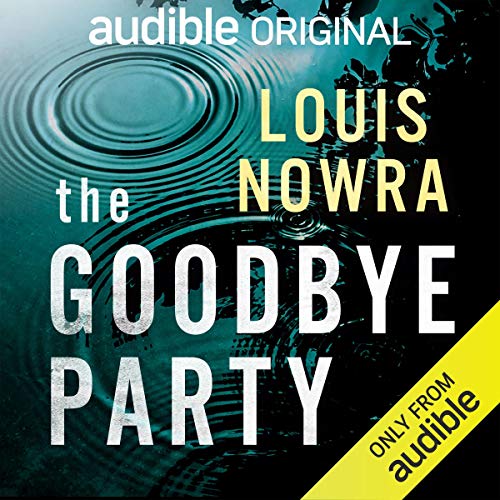 What listeners say about The Goodbye Party

I loved every minute of this and thoroughly enjoyed it. Only thing wrong was the twists and turns kept me up far too late and wore out my batteries!
We need more of these please!

great story I found gripping. a couple of twists, to make compeling listening. hope you enjoy.

As always, Louis Nowra (one of Australia's best playwrights) has written a brilliant story set in Sydney about murder and intrigue in the fringes of mainstream society. Featuring some of Australia's best actors, this story works brilliantly as radio/ voice performance although it could easily be adapted to film/ mini-series format. The 12 half hour episodes are easy to listen to. The production has a great internal rhythm apart from the occasional elongated beat pause which wasn't really necessary, and it was easy to become immersed in the world of the story. Worth buying and listening to.

A really good story, well performed and way better than I expected of a free audio book. Well worth s listen.

Excellent characters and a brilliant plot which kept me guessing, did not want it to end.

Shall look forward to the next one

I really enjoyed this pod cast, it was a great listen, loved the people doing the reading, they were all so good, was sorry to come to the end of the book.

This is an extremely hard to stop listen, finished it in one day while at work, really captivating!!

I certainly hope that there are more of these in the pipeline. Aussie noir is new to me but it'd make a great new genre.

This story sucks you in from the 1st episode and is a very easy to listen to podcast. Loved that it was a full cast as well.

I could not stop listening to this and before I knew it the whole day had gone by. I was completely stunned by the ending.

This was an interesting Aussie murder mystery. A retired cop finds his father dead in his apartment, a needle nearby. He refuses to believe the police assumption that his father was an addict and begins his own investigation into how his died. Taking up a case his father hadn’t solved, he discovers new friends, some enemies and that he knew little about his father’s life. Twists and turns abound with a shocking ending. Well done, not for kids and a great cast and production.

Really enjoyed this one. Each chapter flows beautifully into the next. These chapters add brick after brick to the mystery. recording is well done, sound effects and music color the storey. Very nice acting as well. Voices are varied and cast well.

Enthralling story with complex characters, a strong cast, and excellent production. Five stars all around. Give it a listen!

Loving it still but trying not to finish the story too quick, you definitely get the sense that after this episode something ominous has to happen on Episode 6! Definitely on the edge of my seat wondering what it is.

The narrator was fanastic. The mystery unfolded smoothly and you felt the characters came to a smooth ending..

This podcast is excellent, but episodes 4,8, and 9 are missing, so there is no way to really follow the complete story, which is a huge disappointment because I have been really enjoying it. Audible, please fix this so we don’t miss out!

A little bumpy at times but overall an enjoyable listen. I will look for more from this author.