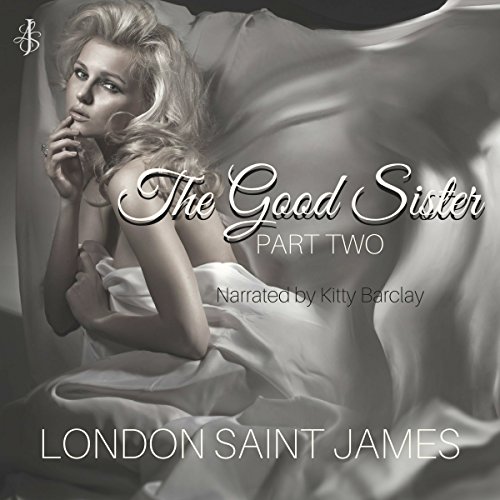 By: London Saint James
Narrated by: Kitty Barclay
Try for £0.00

Trinity Lane Winslow stepped out of her fantasy world and into the real one on a quest to obtain the object of her desire - Reid Addison. The pursuit led her to the infamous Madam Jacqueline Claudette Rousseau, the man she craved, and the debonair Lord Archer, the man who offered what she really longed for-love.

When Reid revealed his dark side, he knew he'd sealed his fate and pushed Trinity into the waiting arms of Lord Archer. Can he live with his decision?

Lord Archer would do anything for his beautiful Trinity, but is he strong enough to hold onto her with all that conspire against them?

What listeners say about The Good Sister: Part Two

What did you love best about The Good Sister: Part Two?

Everything. I love the storyline, characters and narrator.

What was one of the most memorable moments of The Good Sister: Part Two?

When Kitty narrates this
I batted my lashes at him . “I believe I promised you something.”

“What did you promise?”

“That you could do anything you wanted to my bum and my bare flower.” Ashton’s wicked grin reappeared.

“You did promise such. Am I to collect?”

“Bloody hell,” he muttered. “You are not teasing me, are you?”

“Good,” I replied. “Because my flower has missed your cock and your tongue, my lord.”

Have you listened to any of Kitty Barclay’s other performances before? How does this one compare?