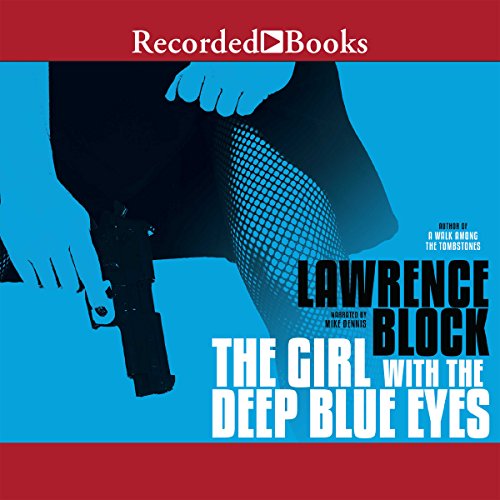 The Girl with the Deep Blue Eyes

By: Lawrence Block
Narrated by: Mike Dennis
Try for £0.00

Florida private eye Doak Miller agreed to help the local cops by posing as a hit man to catch a woman looking to get rid of her husband. But then he met the wife - and fell, hard. Now he's plotting with her to commit a murder that could net them millions of dollars and the chance to be together. But to pull it off under the watchful eyes of the police, it'll have to be the perfect crime....

What listeners say about The Girl with the Deep Blue Eyes

Second time around and I enjoyed it more than last time.

Positives - it's Lawrence Block, so - the plot, the pace, the characters - major and minor, the dialogue, the action, the humour, the sex, the back stories, the outcome.

I love books where someone tries to run a scam, pull a fast one, commit a crime and you root for them, as opposed to them being the villain of the piece and the rasion d'etre being to bring them down.

I must admit I'm surprised I was so miserly with my scoring last time.

I probably ought to say that there's a fair bit of action between the sheets which may not be everyone's cup of tea.

Enjoyed a few months ago on audio and I have to say, I was kind of glad to be listening to it on my own, as Mr Block's main man Doak Miller enjoys an extremely active sex-life with a variety of willing participants in a variety of different orifices, seemingly favouring one where the sun doesn't usually shine - enough said. Probably too much said - Lawrence Block you'd make a sailor blush!

As for the mystery itself, our PI Miller is engaged by a local cop to entrap a waitress who's suspected of wanting her rich husband dead. Miller takes a good look at the waitress likes what he sees and schemes with her to outwit the sheriff, the husband and still run free to enjoy the proceeds.

Overall I liked it and was entertained by the whole shebang. I do wonder whether the sex elements would have the same impact as just the written word, maybe hearing them spoken gave them a greater power. I'm certainly no prude and chuckled along.

With regards to the plot, I was keen to see if our amorous pair could pull it off. I liked the back story of both, Miller's previous life in New York as a cop and the path travelled by our waitress (name escapes me) in arriving at a place where her husband just has to go.

Amusing and entertaining - you wouldn't expect anything less from Lawrence Block.

Listened to back in March, 2016. AUDIBLE COPY purchased.

An episodic book in which the "hero" forces brutal sex on various reluctant women, who are then grateful to him

Lawrence Block usually has some fun repartee between characters which can entertain you through a slow plot. In this book that repartee is crude, and the story primarily consists of episodes of raunchy sex.

Yes I would as long as they can handle it

What other book might you compare The Girl with the Deep Blue Eyes to and why?

Which character – as performed by Mike Dennis – was your favorite?

Doak is the man

A Noir about Noir

Lawrence Block is back, but...

I was going cold turkey with the absence of new books from the Master. So when the new one came out it did not hesitate a second and went for it. This is not -and by far- the best Block book; the great Matt Scudder's stories play in a very different league. However it’s sassy, it’s dirty, it’s mean and pulp like his very early books used to be..and most of all, it's a Lawrence Block !
Welcome back , Master !