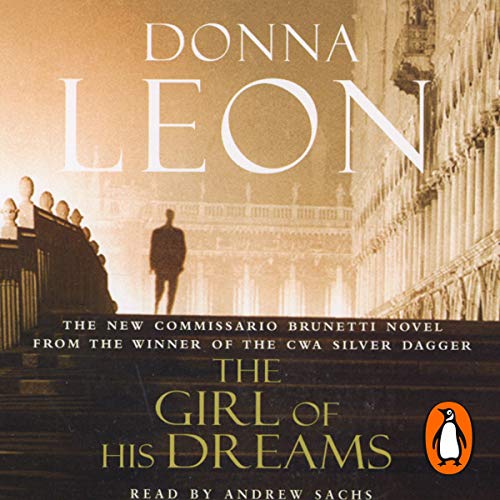 The Girl of His Dreams

As Commissario Guido Brunetti watches his mother buried, he takes some solace in the cloud-dappled sky, and the tops of the Venetian cypress trees, moving gently in the spring breeze.

A few days later, he is consoled by returned missionary priest and family acquaintance, Father Antonin Scallon. But it is not consolation alone that he brings him. Antonin is concerned about a friends son's large donations to the leader of an "alternative" religious organisation, Leonardo Mutti.

Suspicious, Brunetti asks if the man has done anything wrong in making donations. Not yet, the priest replies. Then a 10-year-old gypsy girl is found dead in the canal, a man's wedding ring and watch in her possession, and Brunetti uncovers a thorny world of prejudice and malefaction surrounding the immigrant gypsy communities and encounters the new task force set up to help investigate cases involving "extracommunitari".

Could there be a connection between the maligned gypsy communities and Mutti's alternative "religion"? Sinister forces are at work, and when people or organisations have no respectability left to lose, Pandora's Box is ajar.

"Andrew Sachs brings his customary warm intelligence to this powerful story of a particularly cynical murder. By the end, we can identify the villain but murky political shenanigans will prevent justice from being done. It is sobering, and rings true."( Independent On Sunday)
Show More Show Less