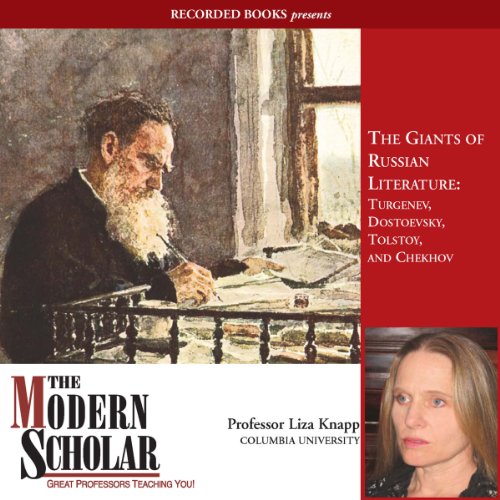 The Giants of Russian Literature

Russian literature of the 19th century is among the richest, most profound, and most human traditions in the world. This course explores this tradition by focusing on four giants: Ivan Turgenev, Fyodor Dostoevsky, Leo Tolstoy, and Anton Chekhov. Their works had an enormous impact on Russian understanding of the human condition. And, just as importantly, these works have been one of Russia's most significant exports: Turgenev, Dostoevsky, Tolstoy, and Chekhov have become part of our literary heritage. And our understanding of the novel is based in large part on the masterpieces of Dostoevsky and Tolstoy, while Chekhov has defined modern notions of the short story. In this course, Knapp acquaints you with the authors, their lives and their times, and their most important works.
©2006 Liza Knapp (P)2006 Recorded Books
Classics
Show More Show Less

What listeners say about The Giants of Russian Literature

The narrator is pleasant to listen to and the content is good. No prior knowledge of Russian literature is assumed but the author gives the info without being patronizing. It's a good introduction and helps the listener get a bit more out of the novels.

the final lecture of this course is a beautifully wrought, profound, discussion on, not only the uniqueness of Russian literature, but also the human condition. Dr. Knapp is a rare academic: her lectures are transcendent and provide, thru the lens of these great Russians, illuminations on what is means to be a human being.

Aroused my interest, concise, interesting, and easy to follow whether or not you've read these classics.

Excellent content and format.It has stimulated my interest in the subject sustantially.Prof. Knapp provides valuable hindsights and reading keys as well as a concise yet comprehensive description of the intellectual ,moral and political environment in which these authors created unavoidable pieces of our common culture.

I learned so much, really loved her treatment of these works and I will continue a long habit of reading these authors with much deeper interest and understanding.

The lecturer does an excellent job of describing the context of the works in several ways that enrich the readers' understanding of literature by the featured authors. She describes the lives of the authors and the historical events occurring in the lives of each. In discussing their works, she shows how various sections are influenced or determined by the time written, the culture, religion, and by other literature, both Russian and European. It has left me wanting to read or reread the literature in light of what she has taught.

The lecturer appears to be reading the talks rather than giving live lectures but it doesn't detract from the presentation. As I have seen in other audio books, she occasionally repeats a sentence she just said. I've always thought readers do these repetitions because they are in some way dissatisfied with how they read certain sentences & they think the first attempt will be edited out... (just MHO- I don't really know the reason.)

Although the recording itself seems choppy in places, the narrator does a wonderful job explaining the course material and overall it was a pleasant listen and informative.

The lecturer explains very well the theme of love and death in great Russian literature. Especially relevant for people wondering big questions like "why live".