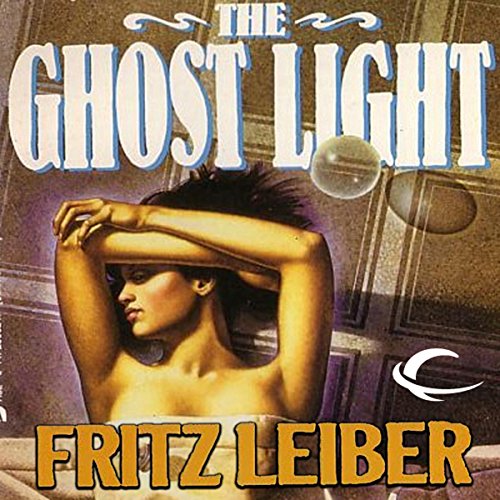 His admirers include Stephen King, Harlan Ellison, John Jakes and Peter Straub. The New York Times called his work "fast moving, ironic and delightful." He is the winner of every major American accolade in the field of fantastic literature: the Hugo Award, the Nebula Award and the World Fantasy Convention's Grandmaster Award. This incredible volume includes some of his greatest tales, a startling novella about ghosts in modern California, and a brilliant look at his own distinguished career. Here is Fritz Leiber at his best....

“The Ghost Light” — Young Tommy and his parents are visiting Cassius, his estranged grandfather, in California. There’s something creepy about the painting of Tommy’s dead grandmother that hangs in the living room and Tommy knows the bluish green nightlight in his bedroom has something to do with it. This is a spooky tale that I mostly enjoyed, even though it (not surprisingly) features a dirty old man lusting after his young female family members. “The Ghost Story” is original to this collection.

“Coming Attraction” — A British man visits post-WWIII Manhattan where radiation levels are high and society has completely changed. After he saves a masked woman from being hit by car, she invites him out and begs him to take her back to England so she can escape her abusive boyfriend. This story was bleak and depressing, but I will never forget the opening line: “The coupe with the fishhooks welded to the fender shouldered up over the curb like the nose of a nightmare.” “Coming Attraction” was originally published in 1950 in Galaxy Science Fiction and was nominated for a Retro Hugo Award in 2001.

“A Deskful of Girls” — A man manages to get an evening invitation to visit the lab of a famous psychologist and to see his work in the field of the psychophysiology of sex. This story is brimming with the blatant sexism and bad psychology of 1950s pulp magazines, but the excellent twist at the end appeased me. Unfortunately, I’ll never be able to listen to Tchaikovsky’s The Nutcracker with happy innocence again. “A Deskful of Girls” was originally published in 1958 in The Magazine of Fantasy and Science Fiction and was nominated for the Hugo Award for Best Novelette.

“Space-Time For Springers” — This delightful story, written from the perspective of a kitten named Gummitch, was my favorite. Kitty has some funny ideas about the world, and he’s got data to back them up. This adorable story was first published in 1958 in Frederik Poul’s Star Science Fiction Stories No. 4 and has been reprinted many times since then. A must-read for all cat lovers.

“Four Ghosts in Hamlet” — The ladies in a company of Shakespearean actors start playing with a Ouija board backstage and then notice there are too many ghosts in their production of Hamlet. This is a good story with plenty of humor and suspense. This 1965 novelette, first published in The Magazine of Fantasy and Science Fiction, was nominated for a Nebula Award.

“Gonna Roll the Bones” — Joe Slattermill is a poor miner who would rather spend his evenings drinking, gambling, and whoring than sitting at home listening to his domineering wife and mother. But when he goes out this night, he finds a new gambling parlor and ends up dicing with Death. This folksy story is an unusual style for Leiber and though I’m not sure I got all the symbolism and allegory, I appreciated the imagery and atmosphere. “Gonna Roll the Bones” was originally published in Harlan Ellison’s highly decorated anthology Dangerous Visions in 1967. It won both the Hugo and Nebula Awards for Best Novelette.

“Bazaar of the Bizarre” — I loved this novelette when I read it in Leiber’s Lankhmar collection Swords Against Death. In this story, Fafhrd and the Gray Mouser are sent by their patron gods to destroy a magic bazaar where customers are enchanted into believing that the trash for sale is valuable. When the Gray Mouser gets there first and falls under its spell, Fafhrd must save him while still carrying out the gods’ commands. This story has been in many collections but was first printed in 1963 in Fantastic Stories of Imagination.

“Midnight by the Morphy Watch” — Fritz Leiber loved to play chess, so it’s not surprising that he’d write a ghost story about what happened to chess champion Paul Morphy’s famous missing watch. Chess enthusiasts will enjoy this novelette. It was first published in Jim Baen’s Worlds of If in 1974 and was nominated for a Hugo Award.

“Black Glass” — First published in Peter Weston’s Andromeda 3 in 1978, this story begins as a man is walking through Manhattan musing that the black glass being used to construct the new sky scrapers could symbolize the doom of New York City as it experiences rising levels of violence and crime, filth and pollution, drugs and porn, and even union strikes and junk food. As he continues walking, he seems to travel to the future and discovers that things will be much worse than he imagined. The climax of this story occurs in the twin towers of the World Trade Center, which makes this story even sadder than Leiber intended.

“Not so Much Disorder and Not so Early Sex: an Autobiographical Essay” — This is a long (5.5 hours on audio) autobiographical piece written when Leiber was 71 years old. He begins by talking a little about his German ancestors and describing his parents’ work (his father owned a traveling Shakespearean theater) and his upbringing with his aunts in Chicago. He goes on to talk about his studies at the University of Chicago, his short careers as an actor and then a priest, his writing, his love of chess, his marriage to Jonquil, their cat (the real Gummitch), and his trouble with alcoholism. Throughout the essay he describes his boyhood fascination with women’s breasts, his long-lasting naiveté about female anatomy and the sex act, and his obsession with understanding what nobody would talk about in an era of sexual repression and lack of sex education. He’s quite candid about this hang-up and he explains how this issue, along with his experiences in the theater and with chess and cats, give a lot of context to the stories in The Ghost Light. “Not so Much Disorder and Not so Early Sex: an Autobiographical Essay” is original to The Ghost Light and was later reprinted in his autobiography Fafhrd & Me and in his novel Conjure Wife.

I listened to the audio version of The Ghost Light which was produced by Audible Frontiers and is read by a team of excellent narrators. The print version has some interior art (each story features an illustration by a different artist) and personal photographs which I missed, but I didn’t mind because I enjoyed the narration so much.

One of Leiber's Best

This is one of Leiber's best collections and a wonderful introduction to his writing if you've never experienced his stories before. There's a good selection (I only miss "A Pail of Air" and "Catch That Zeppelin!" among his short works), including one of his famous "Fafhrd and Grey Mouser" stories.

Highly recommended! You won't want to miss this collection.