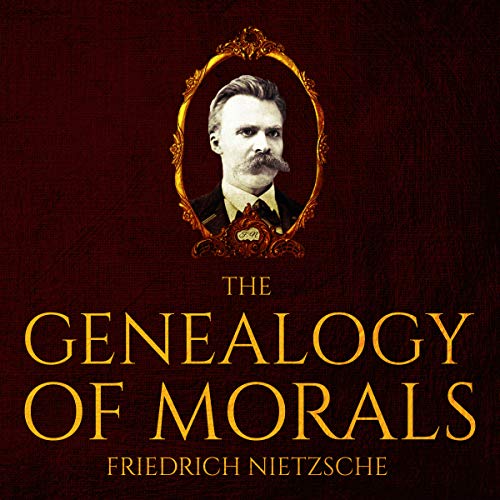 The Genealogy of Morals

The Genealogy of Morals

On the Genealogy of Morality (The Genealogy of Morals) is an 1887 book by German philosopher Friedrich Nietzsche. It consists of a preface and three interrelated essays that expand and follow through on concepts Nietzsche sketched out in Beyond Good and Evil. The three essays trace episodes in the evolution of moral concepts with a view to confronting moral prejudices, specifically those of Christianity and Judaism. Some Nietzsche scholars consider Genealogy to be a work of sustained brilliance and power as well as his masterpiece. Since its publication, it has influenced many authors and philosophers.

What listeners say about The Genealogy of Morals

It should come at no surprise that Nietzsche's work is dense and complicated. Philosophers are not known for their prose, and ideas as profound as Nietzsche's would be difficult for anyone to articulate fully. I've found that audiobooks are an excellent way to understand Nietzsche, as the narrator takes care of the hard work in setting ideas in narrative context and transitioning from idea to idea. There are only two copies of "The Genealogy of Morals" on Audible, and I quite enjoyed this version by Jim D. Johnston. He speaks clearly, enunciates well, and makes it easy to understand these complicated topics. Highly recommended. I was given this free review copy audiobook at my request and have voluntarily left this review.

Where Did Our ‘Morals’ Evolve?

Nietzsche breaks down where he believes morals evolved...to keep silent.... First of all he dissects how hierarchy has impacted the develop,ent of morals..the wealthy and privileged set a standard, the good...the lower class becomes bad.. how blond and light becomes good and dark hair becomes bad. He also addresses the negative of the church as well as aristocratic ideals. Quilt and consciousness..asthenic ideals, artist...Guilt methods... To What Purpose Do We Suffer? Any meaning, to suffer, is better than none. Great narration, kept the piece going..easy to understand and follow. I was given this free review copy audiobook at my request and have voluntarily left this review.