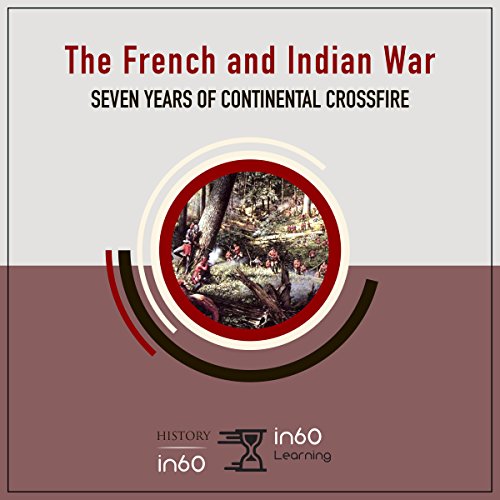 The French and Indian War: Seven Years of Continental Crossfire

Get smarter in just 60 minutes with in60Learning. Concise and elegantly written nonfiction books and audiobooks help you learn the core subject matter in 20 percent of the time that it takes to read a typical book. Life is short, so explore a multitude of fascinating historical, biographical, scientific, political, and financial topics in only an hour each.

The war gets its name from British colonists’ two primary enemies: the French settlers and the Native Americans who sided with them. The title is a bit misleading, however, as the British also had Native Americans on their side at various points of the war. The conflict goes by "The Seven Years’ War" in Europe because it took place from 1756 to 1763. Britain’s victory solidified the future of the English-speaking North America we know today. However, it also led to the massacre of countless Native peoples throughout North America, as they were caught in the crossfire of this British and French conflict.

What listeners say about The French and Indian War: Seven Years of Continental Crossfire

A quick and interesting read.

If perhaps you were not paying attention when you were in School, The French and Indian War could easily have been missed
while you pursued other interests.This is a new Company that chooses topics in a 60 minute dose of easy learning.

appreciate.As all of this Companies quick learning subjects it is read by a great Narrator and attempts to give a even handed
view of a point in History.

So without debating all the details it is a good attempt at educating anyone who wants to improve their knowledge.

Learn lots in just an hour

I recently learned that I had an ancestor who fought in the French and Indian War, so I was very interested in learning more. I love the premise of learning all about a subject in an hour. Everything was laid out chronologically and background information was given if needed.

The narrator did a fabulous job with pacing and pronunciations (although, with the French names I would never know if he was correct or not).

Looking forward to listening to and learning more from this series.

This is the third book I’ve read/listened to by this author and I would listen to another. I’m thoroughly enjoying these books by in60Learning. Again, I’ve learned a lot from the material they’ve covered. Some insight was disturbing- especially the “biological warfare”. I recall all the general content from my schooling but the expanded info is very interesting.

This is the first book I’ve listened to by this narrator and I would listen to another. He did well reading this content and kept me interested. I often prefer to increase the play speed but with his reading it was not really necessary.

The domino that led to America

Very enlightening read, and as far as I could check, historically accurate without embellishment or intentional omissions. This tells a roughly 10-year overview of the 7-year war, from the lead-up, duration of the conflicts, and the aftereffects of this crisis.

Plus, we see the first outing of an American icon: George Washington. Fans of the Broadway musical Hamilton may recall a verse wherein Washington reminisces on his first command, "I led my men into a massacre // I witnessed their deaths firsthand" (Hamilton by Lin-Manuel Miranda). That 'first command' is discussed and taught to listeners.

The War that Shaped America and the World

An interesting and informative look at the French and Indian War and its place in the larger context of the Seven Years War in Europe and as a prelude to the French and American Revolutions. Well researched with detail regarding the various battles that made up the war.
Ideal for a student of North American or European history in the 18th century.

Lots of troop movements and names and dates

in60 Learning is a great way to quickly learn something about a topic which you know very little. 60 minutes is not enough to give you an in depth look, but it's a cheap and quick way to get an overview and determine if you want to pick up that larger tome about the subject. They are well researched, and densely packed for such a small book. And for that alone, in60 learning books will likely always get my tick.

That said... this is probably my least favourite in60 book I have gone through so far.

The book is mostly filled with lots of dates and names, but lacks the personality and human parts of the war. The majority of the book feels like troop numbers and movements, which is easy to get lost in. There is a good 'aftermath' discussion, talking about how this war affected and fed into the coming Revolutionary War.

On a side note, the name French and Indian War seems a silly name for a war when the principal combatants were France and Britain. The native Americans fought on both sides, depending on which tribes you talk about.

I never cared much for history when I was in school, so it is nice to find a place that will "teach" me about it now that I am older!

This company, in60Learning, is doing a good job in providing a quick, succinct overview of historical events that are educational without being boring.

I was probably exposed to these facts about the French and Indian War, but never realized the actual impact that these seven years had on so much of the world, especially North America.

The narrator does a great job and keeps your interest as you learn in spite of yourself. I look forward to listening to more by this group and hope that they continue to make many more of these quick historical lessons.

I really enjoyed this informational audiobook about a struggle that received no attention when I was in school. I was fascinated to learn how this conflict related to the larger Seven Years War in Europe and the coming Revolutionary War. It was interesting to hear the roles some individuals played who would later be pivotal in the Revolutionary War. It wasn’t all dry facts, either, and I enjoyed hearing about the political and personal vendettas of some of the players.
.
The narration was good, smooth and well-paced. He did an excellent job with all the complex French names!

I'm really enjoying these little history lessons. I like even more that you are getting a more real account from various view points and not just one side. If only history had been so interesting and clear in high school, more people would be interested. History is not boring, and one can learn a lot from history and not repeat age old mistakes. However, I remember my lopsided history classes in history being worse than boring and more propaganda. It focused on memorizing dates with limited information about the events, what led to the events, and how it impacted everyone. And, what you did get made one side seem like the "evil bad guys" for trying to protect their homeland from the innocent and wonderful good guys. This 1 hour accounting tells you not only what happened, but what were the motivations behind each groups actions and each groups perspective. I didn't start getting this type of information until college. That's when history got interesting.