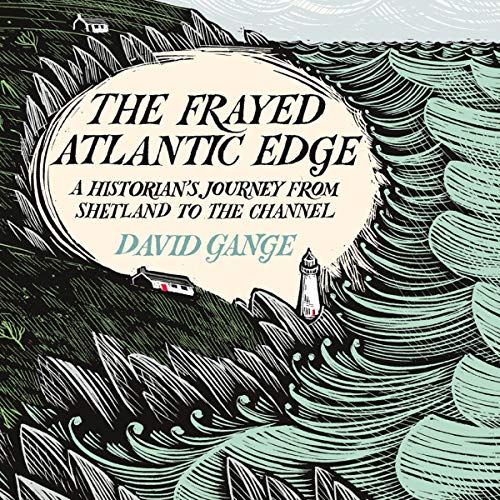 The Frayed Atlantic Edge: A Historian’s Journey from Shetland to the Channel

The story of a breathtaking kayak journey along the weather-ravaged coasts of Atlantic Britain and Ireland, undertaken by a leading historian and nature writer. In a book of staggering range and beauty, learn how wind, rock and ocean have shaped the diverse communities of coastal Scotland, Ireland, Wales and Cornwall.

Over the course of a year, leading historian and nature writer David Gange kayaked the weather-ravaged coasts of Atlantic Britain and Ireland from north to south: every cove, sound, inlet, island. The story of his journey is one of staggering adventure, range and beauty. And one which reveals how the similar ingredients of wind, rock and ocean have been transformed into wildly different Atlantic cultures in coastal Scotland, Ireland, Wales and Cornwall. For too long, Gange argues, the significance of coasts has been underestimated and the potential of small boats as tools to make sense of these histories rarely explored. This audiobook seeks to put this imbalance right.

Paddling alone in sun and storms, among dozens of whales and countless seabirds, Gange and his kayak travelled through a Shetland summer, Scottish winter and Irish spring before reaching Wales and Cornwall.

Sitting low in the water, as did millions in eras when coasts were the main arteries of trade and communication, Gange describes, in captivating prose and loving detail, the experiences of kayaking, coastal living and historical discovery. Drawing on the archives of islands and coastal towns, as well as their vast poetic literatures in many languages, he shows that the neglected histories of these stunning regions are of real importance in reconceptualising both the past and the future of the whole archipelago. It is a history of Britain and Ireland like no other.

"This is the book that has been wanting to be written for decades: the ragged fringe of Britain as a laboratory for the human spirit, challenging, beautiful, a place where sea and land are deeply interpenetrated, often materially impoverished and half obscured by a mawkish romanticism, but actually rich and inevitably complex: and here is the man to do it - physically resourceful, articulate, clear-eyed, informed, attentive to the realities, and crucially at home in all the elements. A book reliant in the end on one key fact: edges are revelatory." (Adam Nicolson, winner of the Wainwright Prize 2018)

"This book is the product of a considerable physical achievement.... A brilliant book, and a major step towards a genuinely radical reimagining of the history of the British Isles." (Scotsman)

"This beautifully written and grippingly researched book shows us that our shores are the beginning, not the ending, of things." (Philip Hoare)

What listeners say about The Frayed Atlantic Edge: A Historian’s Journey from Shetland to the Channel

Words and place names mispronounced throughout

While this is a well-written and fascinating narrative, the mispronunciation of names and places throughout is culturally ignorant and offensive. If you're going to narrate a text on Scotland, learn how to pronounce the words. Scots Gaelic is pronounced gaa-lik. Gay-lik is the pronunciation of Irish Gaelic. The islands of Uist are pronounced you-ist, not wist. The Cuillin mountains of Skye are the coo-linns, not coh-len. The Gaelic poet is Sorley Maclean (mac- lane), not some cleaning product, my Kleen. The famous Scottish ptarmigan bird is pronounced tarmygan, not puh-tar-mee-gan. The list goes on. Nearly every sentence had something mispronounced. The mock generic Scottish accent was equally culturally offensive, especially in the reading of the words of Scottish writers, and suggested, in a sweeping overgeneralisation, all are the same, and everyone in Scotland looks and sounds the same that there is only one voice. The cultural ignorance, and determination to remain culturally and linguistically ignorant, othered the lands and its peoples in a manner which can only be interpreted as racist. This is a shameful reduction of a book which considers diversity.

I liked the narrators voice and tone but the serial mis-pronunciation of proper and place names is almost criminal!
It made me constantly cringe and ruined the enjoyment of the book which is finely written and very entertaining. In an age when we can check the pronunciation of any word there is no excuse for this anymore.
I want to read the book again but will have to buy it as I simply could not go through that again.

Harper Colin’s, should have checked Ed Hughes ability to pronounce Scottish words, it’s so poor it ruins the story. His reference to the beautiful Cuillin Mountains in Skye is pronounced the same way as Colon and that just example of shocking mispronunciations, pure ignorance.

A new perspective on our coastal waters. From Shetland Southwards we are carried on the currents of description of areas mostly explored on land. The story of the canoe boys who travelled to Skye in canvas canoes with no experience of sea canoeing will stay with me forever. I loved the rhythm of this book, like the tide it ebbed and flowed. However, I listened to it on audible and although Ed Hughes had the right tone and his voice was pleasant to spend time with, who on earth chose him to mispronounce almost all the Scottish words? His use of Gaelic was physically painful to hear, place names which inhabit people’s hearts were trashed on his tongue. Was there no guidance given to him on pronunciation? Names of islands rendered unrecognisable, the mountains and lochs of Skye reduced to nonsensical sound. A good reading voice which threatened to ruin a jewel of a book through sloppy research on pronunciation. Surely audible have competent Scottish readers available to do this stunning book justice? I have given it five stars because it is a truly wonderful book, don’t miss the experience of reading it.

I've exceptionally enjoyed listening to this along with the Kindle version when I wanted to pause and make notes on more detail. the combination of the excellent narration with the writing style provides a visceral and evocative window into the perspectives of the Communities he describes on this this journey. I think I got more from this book because I'd already read about half a dozen of the other books he refers to on his journey but I've been left with doesn't more I wish to read in the future

Gange's book is unique and interesting with its heart in the right place.

But the narrator is simply abysmal. A narrator's job is at its most basic level to PRONOUNCE WORDS. If you are not able to do this properly, then you should not be a narrator.

I read previous reviews about the pronunciation errors and just ignored it as I thought it wouldn't detract from the book. Unfortunately, the sheer ignorance and laziness of the narrator's attempt to simply guess at the pronunciation of Gaelic, Scottish, and Irish places, names, and other words bordered on the offensive.

It first I found it humorous, then perplexing, then irritating, then infuriating, then I simply gave up about half-way through. The only island he names correctly that I can remember is 'Skye' - miraculously on this one the narrator went for 'sky' and didn't opt for 'skyay'.

The book is literally about how far-flung peoples have been marginalised - you do these cultures further disservice by not even bothering to look up how to pronounce the names of islands, towns, poets, mountains, animals, or even Scots and Gaelic words which are often used commonly in English. Then I noticed that some words which were simply unusual English words were also pronounced incorrectly (minke whale, for example), which led me to conclude that the narrator was not a bigot, but simply an incompetent fool.

O and by the way - the guy's impersonation of a Scottish accent was simply ridiculous. I was annoyed that it ruined a good book; others would have a right to be downright offended. The Orkney accent is COMPLETELY different from the Glasgow accent which is COMPLETELY different to the Gaelic Highlander's accent. But a silly brogue will do for the Scotch coz, auch aye the noo, who cares, yee ken?

I don't hear other narrators putting on silly Chinese accents for Chinese quotes. Interestingly the narrator didn't go for an Irish Paddy impersonation for the Irish quotes. Wonder why?

I hope both the publishing house and the author see some of these reviews about the narrator because they simply need to rerecord the thing from scratch. It is a joke that completely undermines the message of the book.

I hope that HarperCollins and other big publishing houses take more care in the future when recording audiobooks.

Overall, I feel sorry for the author David Gange because he comes across as a total dude, and I'm sure he would have been appalled when he first heard the audio version of his work.

Great book, despite the bad pronunciation

David Gange was my lecture at university, so I had heard of the project before reading this book. Loved the book and it changed my view of history. The narrator can't even pronounce 'Cymru', which is completely at odds with the celtophile nature of the book.

Many subjects feature in this audiobook - travel, the outdoors, wildlife, history, politics, language, literature etc. It’s an easy listen, doesn’t go too in-depth into any one subject and moves along at a good pace, linking the varied themes together nicely. I found the accompanying Wordpress site really useful to better understand the geography of the journey, although more mapping detail on some of the route sections would have been good. The narrator’s voice and style are fine, but the absolute butchering of Scottish place names was a bit sloppy - surely someone should have checked this before it was released? No one could be expected to pronounce all those languages and dialects with complete accuracy, but seriously, whoever heard of the Skye ‘coalin’ or the Isle of ‘Isslay’?

This is a guy who likes to waffle on without really saying much. Some people might be impressed but it didn’t work for me.

Made me fall in love again with the British isles

A wonderful telling of the history of the Atlantic coast of the British isles. Some have commented on the narrator’s accent when reading Scottish place names, I actually found it to be pretty good, maybe as good as possible for a non-Scot. The sections on the islands of Scotland was my favourite part of the book and left me craving to visit these beautiful areas.