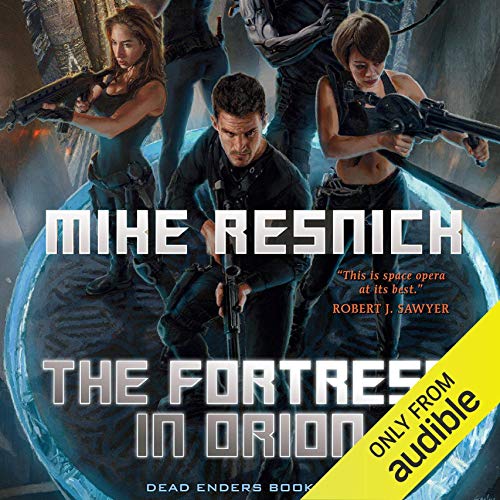 The Fortress in Orion

The Democracy is at war with the alien Traanskei Coalition. War hero Colonel Nathan Pretorius has a record of success on dangerous behind-enemy-lines missions, missions that usually leave him in the hospital. Now he's recruited for a near-impossible assignment that may well leave him dead. At the cost of many lives, the Democracy has managed to clone and train General Michkag, one of the Traanskei's master strategists. Colonel Pretorius and a hand-picked team must kidnap the real Michkag if they can, assassinate him if they can't, but no matter which, put the clone in his place, where he will misdirect the enemy's forces and funnel vital information to the Democracy. Against the odds, Pretorius, along with Cyborg Felix Ortega, computer expert Toni Levi, convict and contortionist Sally "Snake" Kowalski, the near-human empath Marlowe, the alien Gzychurlyx, and Madam Methuselah - the Dead Enders - must infiltrate the Fortress in Orion, accomplish their mission, and escape with their lives.

What listeners say about The Fortress in Orion

Good start, but where's the action?

Nathan Pretorius recently finished a mission that left him missing body parts, which have recently been vat-grown and replaced. While he is still in the hospital, his old friend asks him to take on a near-impossible mission. He agrees, provided he gets to pick his own team. Pretorious and his team must replace an alien Traanskei ruler, Michkag, with a clone. This clone Michkag will help steer the Traanskei Coalition towards peace with the Democracy. The chances of survival and success are both quite small.

This was a quick read containing much of the tropes military scifi is known for. It was fast paced and had interesting characters, who were a bit predictable, but never the less easy to connect with. The author doesn’t spend much time developing alien cultures or delving into the history of his heroes. The mission is laid out, the characters set in place, so just sit back and enjoy the ride!

I really liked that Pretorious’s team included not just 1 female, but 3. And there was none of that silly BS about justifying a female specialist or 3 on the mission. Pretorious didn’t blink at the gender of any of his team mates because he was focused on their skills. Tis refreshing in military scifi and receives 2 thumbs up from me.

Felix Ortega is basically the team’s strong man, having been mostly replaced over the years as one mission after another removed this body part or that. In essence, he is a cyborg. Pandora is super good with computers and can tap into nearly any information line or bypass most every security system. Meanwhile, Cersei uses her empathic abilities to weed out the liars. Snake is a contortionist, and tiny. She can fit into places you wouldn’t think of tucking a pet turtle into. Together, their nearly impossible mission is safely and secretly take the cloned Michkag and his teacher to a Traanskei stronghold, a fortress in Orion, and make the swap. Along the way, the pick up Proto, a strange alien with a nebulous past who can project images into another sentient being’s mind.

The set up for this story is really good and I was hooked right away. But as the story moves forward, not a lot happens. There isn’t much conflict. The few hiccups the team comes across, they deal with quickly and quietly. There was so much hype at the beginning of the book about how dangerous this mission was and then so little happens to the team. Quite frankly, I got a little bored with everything going so well.

On the other hand, Resnick has set this story in a big galaxy with plenty of room to grow. While he didn’t delve deep in the Traanskei Coalition (he did have several alien words scattered throughout the book), he set the first building blocks to do so in future installments to the series.

There was one little plot point that niggled at me through out the story. Pretorious is this seasoned secret deadly mission character. It’s not his first time to the rodeo. However, he makes a could of first-time-commanding-a-deadly-secret-mission mistakes. I felt like these were thrown in to move the story forward, but it also made it hard to believe that Pretorious was as seasoned and capable as we were told he was

It’s a fun quick listen (or read) without the need to engage your higher brain. The characters are memorable, if a bit static. The mission was fun. I look forward to seeing what else Resnick can do with this world he has created and this team he has assembled.

Narration: Christian Rummel was a good pick for this audio. Much of the narration is from Pretorious’s point of view and Rummel had an excellent, authoritative voice for him. He also performed female characters quite well. He excelled at the alien voices and the wicked, cruelly unpronounceable names some of them had. That is where his talent really shown.

Would you try another book from Mike Resnick and/or Christian Rummel?

Not really at least not this series. The writing was not bad but I have had better.

What was most disappointing about Mike Resnick’s story?

If you watched the old mission impossible TV show this could pass for a TV show in space. No one bites the dust, there are not problems. Everything goes pretty much as planned there are no major set backs or un-timley deaths. Except for the bad buys

What does Christian Rummel bring to the story that you wouldn’t experience if you just read the book?

He makes the book listenable. I now seek out books where the person telling the story makes it come to life or keeps you in even though the story may suck

I could see a TV show based out of this.

I never give anyone one 1 star because I could not write a book even though I would love to be able to do so. So anyone who has the guts to put their work up for abuse and try is worth at least 3 stars

I always like a good military space romp. Having never heard of the author, I am always skeptical. However Christian Rummel as the narrator sold me on this title. I am expecting brutal battles with alien races, technological jargon, and an all over fun listen.

This was a very fast paced, straight forward, good old space military adventure. Our hero, Colonel Nathan Pretorius, is the one the military will send when they they think it is an impossible mission, a dead end, knowing that if anyone can pull it off it will be him. Here he gets to choose his team from non-military associations, which helps him immensely in the end.

He recruits his hand picked team of outlaws and they embark on an impossible mission to kidnap the leader of the “evil” alien warlords. Seems so simple, right? Well, even though they only had a 3% chance of a successful mission, it did seem very easy. Several games of cat and mouse, a few hit and runs and they are finally staring their prize in the face.

Full of colorful characters and alien races, think of Star Wars + Rambo + Ocean’s Eleven = The Fortress in Orion. If you are a lover of interesting and humorous dialog, this will be in your wheelhouse.

This was my first adventure by Resnick and I will be looking for more from him in the future as I need to have fun listening every now and again.

Christian Rummel was on point for this one. An audio technician of characterizations, some how creating the perfect voice of each and every one. You wouldn’t think that a man with such a deep and resonating “normal” voice would be able to create believable voices for the female characters. Rummel manages this with no audible effort what so ever.

I knew that I could count on Rummel for delivering a solid performance. He kept me engaged and waiting for whatever happens next.

Resnick's Editor Is Too Soft

Good space opera premise. But the execution is sadly lacking. Resnick needs a much tougher editor.

What was most disappointing about Mike Resnick’s story?

Thing One: Resnick seems to forget what he's had his characters do in previous chapters, in order to create - or rather REcreate - drama/tension in later ones. For example, the clone that's central to the plot says a few lines in the presence of the other characters in the chapter where he's introduced. Later on, the clone says pretty much exactly the same lines all over again, but with the incongruity that the Colonel (the main protagonist) makes the point of noticing that this is the FIRST time he's heard the clone "actually speak!"Thing Two: The Colonel is supposedly a masterful special ops soldier. Yet he constantly makes incredibly stupid mistakes, again in order to create tension. It's no wonder that he's left pieces of himself all over the galaxy. This character - AND everyone else in the crew - manages to forget a very important facet of one character's abilities (which forgetfulness of course causes dramatic difficulties) even after saying aloud to everyone, "We need to remember that." Then he compounds that error by simply forgetting about it, so that later on he has to cobble together a fake cover story . . . when it would have been AMAZINGLY simple to have set up that same cover story for real with just a TINY bit of forethought.Thing Three: The crew spends an inordinate amount of time worrying aloud about not having a cover story for tooling around backwater systems in a succession of small ships, all the while ignoring what seems (at least to this reader) the OBVIOUS answer from the first moment: pretend to be a tramp freighter then pick cargos headed in the right general direction.All in all, the story reminds me very much of a play-by-post roleplaying game: richly drawn characters who do pretty much nothing for long periods of time, then when they actually do something they tend to suffer from astonishing memory gaps (because their poor players can't remember what their characters did a few hours or days ago in the game but which was written by them weeks or months ago in real life).[Resnick suffers the same handicaps in other works. He wrote a steampunk/horror Western novel wherein he describes in multiple scenes the extreme physical weakness of Doc Holiday using elaborate detail . . . then in the book's climax Resnick blithely has Doc drag an adult dead body into an alley BY HIMSELF, with no explanation whatsoever offered as to how and where Doc acquired this sudden strength. Maybe Resnick is going senile?]

I think he did the female voices very well. He also somehow managed to deliver the overly dramatic phrasing - particularly the bits where he must have noticed he was repeating himself almost verbatim - without laughing.

Could you see The Fortress in Orion being made into a movie or a TV series? Who should the stars be?

Dark Matter was a better story: at least there the characters had a legitimate reason for their amnesia. Maybe play it for comedy, with Chris Rock as the Colonel.

I really, really wanted to like this story. I love space opera in general, especially when it centers on a crew of misfits who end up fighting the good fight, a la Alien Resurrection and Firefly. But Resnick's laziness/inattention in telling it ended up just p***ing me off.