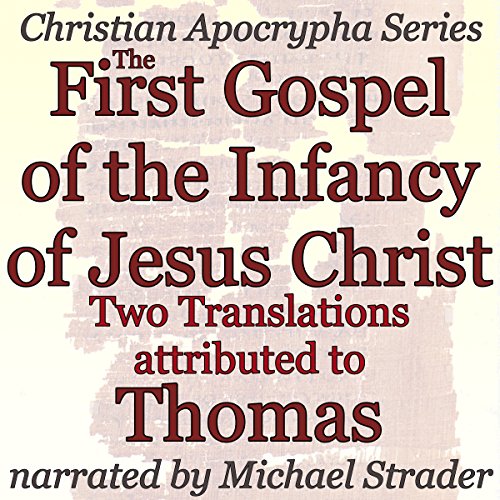 The First Gospel of the Infancy of Jesus Christ: Two Translations

By: Thomas
Narrated by: Michael Strader
Try for £0.00

The First Gospel of the Infancy of Jesus Christ, also commonly referred to as The Infancy Gospel of Thomas (not to be confused with the apocryphal book simply called the Gospel of Thomas), dates to AD 185 and tells stories of the early events in the life of Christ, including miracles; although, also included are stories depicting the childhood Jesus behaving less sacredly than one might expect, which may be exactly the reason why the infancy gospels were never considered canon by the Church. Presented here is a translation of one of the longer Greek versions and one of the longer Latin versions. These translations are from the 19th century.

What listeners say about The First Gospel of the Infancy of Jesus Christ: Two Translations

I found this gospel amazing and astonishing to listen to. I feel the personality of Jesus from the 4 gospels in the bible match the personality of the child Jesus in this gospel.
It's interesting to listen to the 2 translations of greek and latin and hear the tiny differences, such as where the greek will say 'young man' the latin says 'boy'. From the context of the story its plain that young man is a more accurate description than boy.
The narration is pleasant and soft. Not impeding to the understanding or flow of the story in anyway , as some readers can be.
I recommend this audio book!

Wanted to learn of the early life of my Lord and Saviour and this was very enlightening and awesome.

I WAS GIVEN ANSWERS GLORY TO THE HEAVENLY FATHER.

mannn this is awesome! it gives a little insight to HIS upbringing and character!!! all the time GOD yet still a child!!!