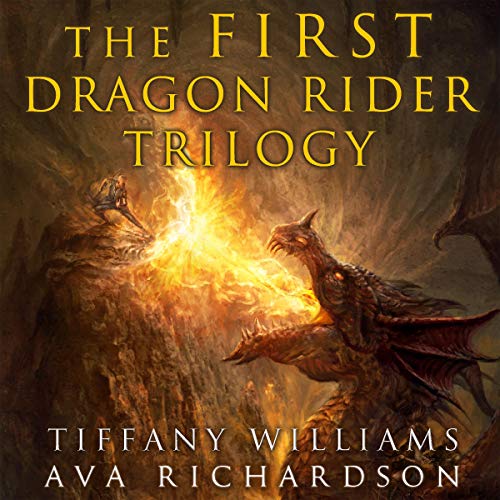 By: Ava Richardson
Narrated by: Tiffany Williams
Try for £0.00

The new world is calling...

Neill Torvald is desperate to prove himself - his father’s warlord kingdom depends on him. When a vicious attack on the way to the Draconis Order monastery nearly kills him, it becomes clear that grave trials await him on this path.

Jodreth, the wise monk who saves his life, advises caution upon entering the sacred halls. His mission is to learn arcane magic from the monks that will help to cement his father’s power, but Neill will need more than magical arts alone to navigate the challenges before him.

Among the monks’ students, Neill meets the lovely and mysterious Char, who senses evil deep within the ranks of the Draconis Order’s members. She takes him to a dragon she has raised, Paxala, and the three of them become fast friends. Neill soon grows in strength as he and his fellow students gain ancient knowledge, and his closeness to Char blossoms into something more.

But when Neill’s brothers grow impatient and attack the monastery in a bid to seize power, he will have to decide where his loyalties lie: with his warlord father’s domain, or the new friends he has made in the wider world.

Sometimes, the past is best left behind...

Char longs for peace and escape, preferring her dreams to the ugly realities of an uncertain age. As an illegitimate daughter of the North Prince, Char has always felt deep insecurity, but she must put that aside when Zaxx gives her the task of retrieving an ancient crown from her family’s palace. If she brings him this crown, he says, he will allow the dragon hoard to choose their riders.

When her father sends for her to return home, fearing war, she senses an opportunity. But Char’s dragon Paxala has grander ideas - she wants to become the greatest of all dragons and defeat the ancient Zaxx. But she can’t do it without Char’s guidance and aid.

Employing patience and skill, Char will have to learn the secrets of dragon lore hidden away in her father's archives before Zaxx’s suspicions turn aggressive.

With the help of her love Neill, Char discovers the secret of the old queen’s crown in her father’s castle, learning a tale of dark magic steeped in blood. But when her father wishes to marry her off to the leader of the Wildmen, the fate of Torvald will depend on her difficult choice: accept the role she has always played, or learn to trust her own power.?

To unite a fractured kingdom, a reluctant hero must rise.

Neill has been charged with the impossible task of bringing the Middle Kingdom together to fight the burgeoning threat posed by the rogue sorcerer Ansall and his dragon Zaxx. Neill longs for his old life as a mere foot soldier for his father, responsible only for his family’s well-being, and is unsure about whether he is fit to lead an army.

Neill’s contemplative nature forces him to consider every aspect of the problems he faces, but often makes it difficult for him to take action, and failure to act could mean the deaths of many.

Now, echoing Char and their dragon Paxala, his duty beckons him to lead the Dragon Riders - and take his rightful place as king - but with doubt and new enemies creeping in, his resolve will be tested. When the mysterious Dark Prince arrives with an offer, Neill will have to make a decision that could change the course of history.

As Ansall grows in strength by harnessing black magic, Neill must choose between his own desires and the welfare of the entire kingdom.

What listeners say about The First Dragon Rider Trilogy

to much too much whining and crying

man if you want a whining book this is it. my Lord I had to turn it off. and I have only ever turned off 1 book. this book sucks lol.

Barely made it through the first book

I picked up the first book in the series, Dragon God, and loved it. So I was overjoyed to learn that I could get the entire trilogy together as one set. And I was not disappointed. The story is full of characters of depth, and I found myself connected to them. Narration was excellent, and many time I would forget that a woman was giving voice to men and boys.

For me, I always want to finish a book wanting more, and I definitely do here. I hope to listen to many more stories by Ava Richardson

I was given a free copy of this trilogy in exchange for an unbiased review.

A story worth more than simple stars.

A story just like a river some parts calm and warm other parts harsh and cold and anywhere imbetween. the narration was amazing it felt so real perfect for people who want an adventure to escape or a nice story to drift into the new wonderful world Ava Richardson has created.

another great trilogy by Ava that appeals to all ages. I recommend listening and/or reading this series.

Having this trilogy in a compendium is a great value. It provides a nice-sized adventure/character story. The author does a nice job of character building here. We get to know our major characters and can fully decide whether we like or dislike them. I will say we spend much of the time experiencing life inside the unsure and self-doubting minds of teenagers though. That isn't necessarily bad, it's just not exactly what I expected. I had imagined more of a sweeping fantasy adventure on the back of a dragon, full of dangers and fights. Overall, this story spends a bit more time in character development than I expected. Occasionally it does a bit more explaining/telling than showing, but these moments didn't prevent me from enjoying the tale. There seems to be much more to this world that could lead to other books too. I would certainly recommend this tale, particularly with the whole trilogy just costing 1 point.

Narration was very well done and displays strong effort to make this a performance. The narrator works to ensure it isn't difficult to identify who is speaking (or thinking). Narration really added to the experience.

I was given a free review copy of this audiobook at my request and have voluntarily left this honest review.

Interesting take on a medieval YA

I really liked this series. The characters were fleshed out enough that it kept things interesting. Some characters could have been served with a bit more development to make transitions less jarring (i.e. Terrance in book 3) but overall it didn't really detract from the overall story for me. It was a good length, where it never felt like it was dragging along. Performance was great!

My biggest complaint is actually the inner monologue of Neil in the 3rd book. I understand the point of it, but his depression and imposture syndrome was hit WAY too hard in my opinion. it was weaved into just about every sentence. Half way through the last book I just started rolling my eyes every time he felt sorry for himself.

Great book - Really draws you in.

Loved this book. The main character at times can come off a bit whiney. Couldn't stop listening!