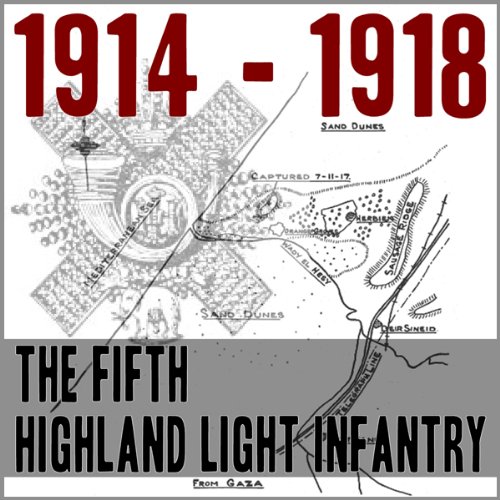 FNH Audio presents a complete and unabridged audiobook covering the war-time activities of the 5th Battalion Highland Light Infantry during the First World War. It was initially published in 1921, just a few years after the end of the Great War. The author was Colonel F. L. Morrison C.B., D.S.O., V.D., who served with the battalion during the war. The book opens with the battalion setting sail for the East, destined to take part in the Gallipoli campaign.

On arrival, they find themselves with only a couple of days to acclimatise before being thrown into the trenches. They have to come to terms with a lack of supplies, terrible weather and constant attacks. The book details all of the combat actions that the 5th take part in on the peninsula.

As you listen, you'll become familiar with the individual trenches and some of the personalities. With the evacuation of Gallipoli, the 5th find themselves off to the desert and Cairo. We get to follow them as they defend Suez, cross the Sinai and battle at Gaza and beyond. The story continues as they leave Palestine for the dirt and mud of the Trenches in France. It's there that the battalion wins its first Victoria Cross of the war.

This book is a fascinating insight into the workings of a World War I battalion in action, from the digging of trenches to the organisation of a solid defensive position and the patrolling of no-man’s land. It's also sprinkled with occasional amusing anecdotes that show the spirit of man shining in even the most desperate of situations.

A must for any First World War enthusiast. This book covers the campaigns in Egypt and Palestine in an informative and entertaining way. Although nominally about a single battalion, it's experiences and the first-hand accounts of it's members equally apply to the army as a whole.

I think the book is well read, but I can see how the narrator could be an acquired taste, so I'd advise listening to the preview first.

Must agree with the other reviewer about the narrator.Early into the book he mentions the battle of Mons and the subsequent retreat at Le Cateau.Unfortunately he calls it Le Chateau which immediately puts me off as its obvious he does not know much about WW1,as any amateur historian who wants to listen to this book is listening out for every detail as it is very in depth (and these were pivotal battles of the war). as you would expect as it is written by a senior officer.It would be really nice if this type of book was read by a real expert.Listen to the war stories read by the late historian Richard Holmes and hear the difference between someone who really knows and enjoys his subject and someone who is just doing a job of reading.

Very interesting, given it's narrow focus

This is a memoir, and thus is not much of a "story". It mentions people and places unknown to the listener. Given this, it provides a fascinating window for those of us with a serious interest in the life and times of the people who lived in the late 19th and early 20th centuries.