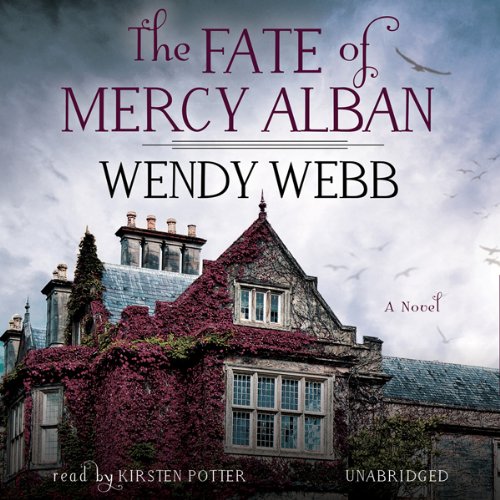 The Fate of Mercy Alban

By: Wendy Webb
Narrated by: Kirsten Potter
Try for £0.00

Grace Alban has spent 20 years away from her childhood home, the stately Alban House on the shores of Lake Superior - for reasons she would rather forget. But when her mother’s unexpected death brings Grace and her teenage daughter home, she finds more than just her own personal demons haunting the halls and passageways of Alban House. Long-buried family secrets, a packet of old love letters, and a lost manuscript plunge Grace into a decades-old mystery about a scandalous party at Alban House during which a world-famous author took his own life and Grace’s aunt disappeared without a trace. That night has been shrouded in secrecy by the powerful Alban family for all of these years, and Grace realizes her family secrets tangle and twist as darkly as the hidden passages of Alban House. Her mother was intending to tell the truth about that night to a reporter on the very day she died. Could it have been murder, or was she a victim of the supposed Alban curse? With the help of the disarmingly kind - and attractive - Reverend Matthew Parker, Grace must uncover the truth about her home and its curse before she and her daughter become the next victims.

Wendy Webb has woven a suspenseful mystery that skillfully skirts the boundary between what is paranormal and what is psychological.

Wendy Webb is editor-in-chief of Duluth-Superior, an upscale lifestyle magazine. A journalist with two decades of experience, she lives in Minnesota.

What listeners say about The Fate of Mercy Alban

I was so hungry to hear the last bits and pieces of the tale! My hunger was satisfied! But now, I find myself struggling because I do not want to leave the company of these characters! Oh how I wish I could remain among them at the house, taking breakfast with them, chatting with Jane and developing friendship with all of them!
This is the third book I've listened to by this brilliant author and although I've enjoyed all of the, this may very well be my favorite! She is an amazing author, yes but some who write have a true gift for telling a story and I count her among the best! You can have anyone write a book, creating a story with a setting and characters to create the action, have a climax and an end. There is just so much depth here, detail, not so much feeling as it is pure emotion with that you experience with them! I could almost smell the coffee & hearty breakfasts, taste the wine, feel the warmth of the fire as I curled up next to Amity and her Mother. I want to go to this house and live out the rest of my days there!
Great story! So worth giving it a listen!

This book had me sitting on the edge of my chair listening to her every word, waiting for the next plot twist! Every time I thought I solved it there was another surprise. Superb writing.

I almost returned this book in the first 4 chapters, but then things changed. A book within a book... Oh My! It kept my interest because of the characters. The last 8 chapters of this book I could not stop listening. So very well narrated & written.

This was a great book

I had a hard time putting this book down you just didn't know what was going to happen next. So it was very exciting and the end well you you just have to get the book.

What would have made The Fate of Mercy Alban better?

It wasn't intended to be funny, but laughed out loud when two charactersa are about to go into dark hidden corridors seeking a dangerous elusive deadly character, and one says to the other "Do you think we should call the police?"

What could Wendy Webb have done to make this a more enjoyable book for you?

Instead of the very predictable romance, maybe a female friend, old or new, could take the part of a supportive, possibly humorous sounding-board for story to be told to.

Did Kirsten Potter do a good job differentiating all the characters? How?

There was a book-within-a-book, written 50 years apart by different authors, and both sounded identical in style and tone.

Some of the interplay between mother and teenage daughter rang true and made these two characters likable.

I was really excited to read this book however it just didn't quite creep me out as much as I wanted it to. I kept thinking it was kind of like Murder She Wrote a little corny. and the narrator was very monotone so added to the Blah

my first book with audible escape. I am SOOOO HOOKED!! THIS IS going to be so much fun!

Would you consider the audio edition of The Fate of Mercy Alban to be better than the print version?

Never doubt wendy webb to send out a well written horror story with dynamic characters and plot twists. Have never regretted a purchase!

Have you listened to any of Kirsten Potter’s other performances before? How does this one compare?

Every moment that involved the manuscript.

Ran a bit long, but worth it.

Really kept my interest, very spooky. Ending was kind of eh but overall good book. Problem with performance that audio would fluctuate and it was sometimes difficult to hear. It was nice to have a scary story that isn't all blood and gore. Would recommend .

This book reminded me of the Nancy Drew novels I used to love as a kid. I would call it creepy, mystery light. It was a good story with very tight editing. But, I would have made the main character the daughter instead of the mother so that it would have been considered part of the young adult genre.