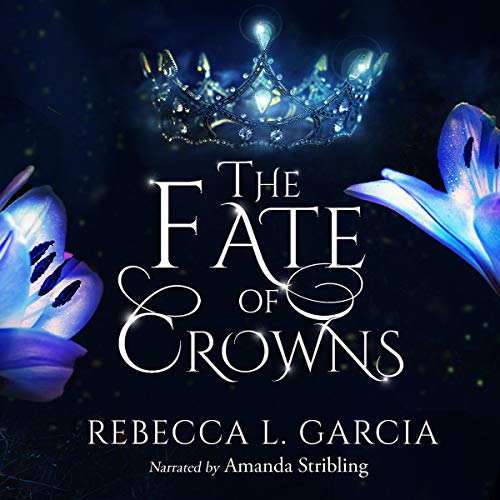 The Fate of Crowns

By: Rebecca L. Garcia
Narrated by: Amanda Stribling
Try for £0.00

With my brother's death came the crown and all the trappings that accompany it. Now, my father -the most dangerous man in Magaelor - seeks to control my future. But fate has other plans.

Thrown into mer-filled waters, I'm dragged into the rival kingdom of Berovia. Surrounded by those who murdered my brother and wished my entire family dead, I must find my way back to my kingdom. There, a marriage could bring peace to a century-old division between the fae and sorcerers. But dark revelations and deadly lies threaten to destroy my destiny. I must make the choice between my duty, family, and truth before it's too late.

Will I allow myself to become the queen of everything? Or be reduced to a cautionary tale as the princess of nothing?

The Fate of Crowns is a fast-paced YA epic fantasy about a sheltered princess who travels between magical kingdoms, discovering a world vastly different to what she'd been led to believe.

What listeners say about The Fate of Crowns

I really enjoyed this story! I give it a 4.5 It's a fantastic start to the series.
I loved the world building. Right off the bat is an arranged marriage. Winter, our MC ends up in a different rival kingdom for some time. She ends up with other types of people(Fae, Elves, different types of sorcerers) And sees how they live, which is different than she's been taught. Surprisingly makes some friends along the way.
Cedric is such a fun character! Blaise is awesome too. He keeps you on your toes for sure. Winter is kind of a bratty Princess in the beginning but she grows on you as the story unfolds 😊 There's a character that reminds me of Rumplestiltskin from Once Upon A Time. 😈
We've got an invasion, pirates, court intrigue, murder, betrayal, some romance ... all kinds of fun stuff!!
Its a fast paced read. It moves along pretty quickly as she travels.
Winter has an internal battle going on towards the end and I'm here for it! 😏😆
There's also a great glossary and pronunciation guide in the back! 🙌🏼
.
👇🏼 Some quotes
"How could you be so stupid as to come alone?” My cheeks heated, stinging the cold from them. “You could have gotten yourself killed... us killed.”
His eyebrows were slightly raised, his lips fighting a smile. “Ah, my beautiful bride-to-be, already scolding me.”
“It’s not funny.”
He smirked, dimpling his cheeks. “I never said it was.”
.
"If you’re planning on underestimating me this much when we’re married, then you’ll have a lot of surprises in store.”
.
It didn’t feel natural to me, betrayal and war, but it would. Someone had to carry the weight of a kingdom and make the decisions no one else would.
.
"Don’t be the hero, love. It doesn’t suit you.”

I was lucky enough to get a copy of this book and I'm leaving an honest and voluntary review.
A very enjoyable experience, superb detailing and pleanty of depth, I was taken on an adventure, a journey filled with mystery, danger and all you'd want in a fantasy. the characters are perfectly suited to this very imaginative story. incredibly well written and very easy to get lost in the journey.
The narration is flawless, adding a uniqueness, giving each character life, a personality, and completing the whole experience perfectly.
I wouldn't hesitate to recommend this YA fantasy to anyone.

I received the audiobook ARC of The Fate of Crowns free of charge from the author, Rebecca L. Garcia. It was my choice to read and review.

The tension was heightened for me in the audiobook experience especially in scenes with Winter + Cedric or Blaise and Winter + her mom or dad or Morgana. The action scenes as well like the one with the merpeople were more intense and gripping to me in the audiobook version. I felt more connected to Winter when listening to the audiobook. The narrator does a great job!

Winter's journey through the book kept me on the edge of my seat and surprised me at every turn. One of my favorite things about a book is when I try to figure out what will happen next in my head and the book takes a totally different direction and that definitely happened when reading this, multiple times.

I'm not an expert on the world yet or the fae but, I'm sure the next book will explore more and give some background to the history of the kingdoms. I flew through it and would have liked it even longer and more world-building and background details.

If you like any of the fantasy elements I mentioned above, I'd recommend reading The Fate of Crowns.

THE AUDIOBOOK IS GREAT!!!!

The narrator did a perfect job at being the voice of Winter!!! The story is great! The characters are great! Can't wait to read the second book!!!

The Fate Of Crowns

The Fate of Crowns, Book #1) is a state-of-the-art young adult fantasy novel that is fast paced and highly intriguing you will not be able to stop listening. The world building aspect descriptions and settings are intricately detailed and very vivid. The makeup of the plot of the story is spellbinding. The characters are compelling with complex personalities. The writing style exhuberates a highly creative mind. Mystical creatures, heaps of magic and suspense creating a euphoria of emotions. So excited to listen to the next audio when available. Rebecca L. Garcia is a highly talented fantasy writer that writes stories that are a escape from reality. I have loved everything she has written and this is probably her best work yet.


Narrator Amanda Stribling brings her all in this performance. A impeccable portrayal of Winter and the other characters. Her inflection is smooth and very easy listening. Her tone changes with the characters. She has the ability to bring out all the emotions you feel while listening.

I highly recommend this fantasy series as it takes you away to another world.

The Fate of Crowns is the first book in a magnificent epic YA fantasy series by Rebecca L. Garcia.
Welcome to the world of Winter Mortis. Winter is princess of Magaelor—a land of sorcerers. She’s been betrothed to a dark fae in the hopes that the sorcerers and fae can finally find peace.
After a series of events in which her brother dies and her father becomes a threat, Winter finds herself on an epic journey that leads her from mer-filled waters and to the rival kingdoms of Berovia, and Niferum. Winter wants to do what it takes to secure her seat on the throne of Magaelor, but in a world where she’s surrounded by secrets—and the people responsible for her brother’s death—it can be hard for a sheltered princess to safely navigate other lands and their people.
The Fate of Crowns has everything fans of epic fantasy adore: princesses, fae (light and dark fae), mer-people, elves, grand adventures, and great risk. Rebecca L Garcia has done an excellent job in crafting an enjoyable adventure and I can’t wait for the next installment.
I had the opportunity to listen to the audiobook version of The Fate of Crowns and the performance was engaging and perfectly captured the character. The pace of the book is quick and it’s an easy and entertaining read.
The Fate of Crowns is available now—and check out book 2 in the series, The Princess of Nothing.

Fate as a Ruler

This is a great beginning to what I am sure will be an amazing series of books. The story is fast paced, the world building is great, and the characters are well-developed. The author has done it again with bringing another epic fantasy to life.

Winter is a Princess who thinks that she knows what is going on in her Kingdom as well as in those around her. But, when her brother, who was fated to inherit the crown, is killed, her world starts to crash. Soon, she finds herself in strange lands, surrounded by people that she has been taught not to trust. Her only desire is to rule her people and her Kingdom. But, it seems that there are people who have other things in mind for her.

The narrator, Amanda Stribling, does a great job and really added a lot to this book. This book does not end with a happy ending but is instead a great introduction to the world of Magaelor. I look forward to continuing Winter's adventure in future books.

What the fates allow

The story is enchanting; the voice mesmerizing; the characters are so very real. once again Rebecca L. Garcia has created a world that you can get lost in and longing for more.
Amanda Stribling IS Winter. Her voice seems to mature as the character grows up and realizes things aren't always as they seem.

An excellent start to a promising series

This was a great story with wonderful characters. Winter's development from sheltered and entitled to smart and a fighter was great to see. The world building is some of the best I've seen in years and has creatures of all shapes and sizes and the magic systems were unique and diverse.
I enjoyed the chemistry and banter between Winter and Blaise and the other friendships she encountered along the way. The ending was superbly done and leads the way for book two.
Ms. Stribling did a fantastic job on narrating Winter and the other characters giving them their own unique tones. I highly recommend this audiobook for all high fantasy lovers for this adventure driven young adult novel.

I really enjoyed this adventure fantasy. The story was magical yet heartbreaking. A great beginning to what I’m assuming is going to be a fantastic series. The narration was absolutely wonderful. Amanda Stribling is a great narrator who’s voice talents are absolutely perfect for these characters. She really brings out the excitement, despair and wonder in this story, well done!
This story does not have an HEA and is continues to book 2.
I highly recommend this book.