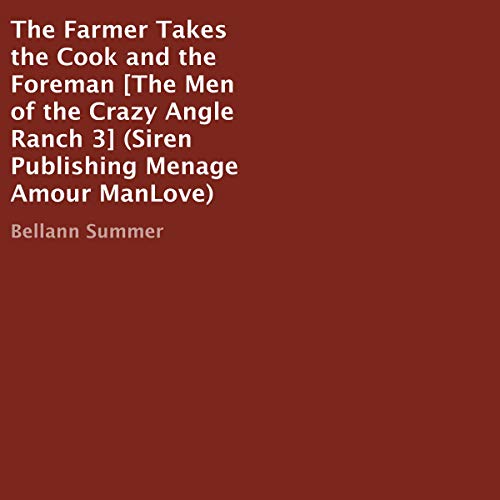 The Farmer Takes the Cook and the Foreman: The Men of the Crazy Angle Ranch, 3

Zaiden Moore was late for lunch, no big deal. Except the new cook took one look at his red hair and blue eyes and ran out of the room. What's a man who loves to grow produce and grains going to do? Run after him, of course. What farmer doesn't worship the sun? Adam VanPeterson shut down all emotions after the World Trade Center disaster, for everything he cared about. Now he has fun and then moves on. He's had his eye on Zaiden for years, but until the pretty cook arrived, he was never going to act on his attraction. Can Elliot, who radiates sunshine and warmth, draw the man in black into the light? Elliot Fisher promised to be open to love if it came his way. Somehow he didn't think the promise included not one, but two handsome, huge, gorgeous men who keep kissing him every time he turns around.

What listeners say about The Farmer Takes the Cook and the Foreman: The Men of the Crazy Angle Ranch, 3

Great next- in- series

This kind of story is totally one of my addictions: insta-attraction among hot men, sweetly falling in love and having steamy sex, with a little action and a lot of chosen family thrown in. If that's your addiction too, you really need this series in your life.

I again really enjoyed Darcy Stark's performance. He has a very pleasant voice, and I thought he did better at differentiating the various cowboy characters so I could keep track of who was speaking.

The performance from the narrator is very important for me. I can't listen to a lot, because my English as a non-native-speaker isn't so perfect to follow a whole story over hours, when the narrator speaks too fast or too sloppy. Normally I have to SEE the person, who is talking to me in English. It took me a little bit, to come into the narrator, but at the end, it worked. I only have to take a few breaks between. I'm just not yet finish with the book, but I listen enough to give a review.