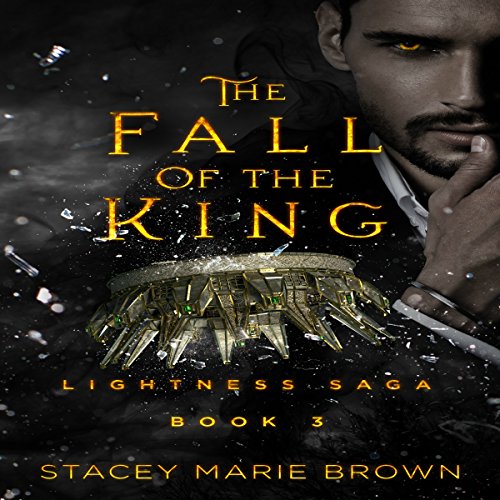 The Fall of the King

There is nothing the Unseelie King can’t acquire. That is until he meets Fionna Cathbad, a fierce Druid, who won’t bow to anyone. Especially Lars. The Demon King has every right to kill her. Her treasonous acts against the crown are indisputable. But she is the key to the one thing he wants more than anything: the Cauldron of Dagda.

A powerful treasure that no fae, even the King, should possess. To get what he wants, Lars discovers the very thing that forces Fionna to help him. This leads them down a treacherous path because it’s not only Fionna who is deceiving him.

His own mind is starting to turn on him, twisting his sanity, and releasing the demon he keeps pinned up. As old ghosts and new foes step into this game, Lars needs to find the cauldron before all is lost.

What listeners say about The Fall of the King

The narration on this book is awful. I actually missed key plot details - a friend pointed them out - because I was rushing through this. I’m committed to the story, but dear god can’t we get decent narrators?!

story was great, female narrator was not good

I loved is story and was so excited to get to Lars and Fiona. Then the female narrator started and I wanted to stop listening. Her cadence is weird and off. It's almost like a weird AI. I think it would be much more enjoyable to have someone else narrate.

This book and narrators was SO MUCH BETTER!!

I swear the narrators can make or break a audible book.
Plus this book the characters we're so annoying and the story is just better.
I do wosh this Author would let some happy good things happen more often and let the good guys win big for once. This is the beat book so far.
But I absolutely HATE THE ENDING! Its total crap and BS!

Love love love the story and I have read every book involved in this fictional world. However, the female voice actress dropped the ball on this one. the Male actor does wonderful with Lars but it is hard to connect to Fiona.

Male narrator was good but the female was horrible. she paused way too much and drew out her words too much. annoying to listen to.

The first 2 books were extremely easy to listen to. But this book is so hard to listen to. Female narrator ruined it. Story line was great but I think I will need to read the book myself. snot sure if I will even make it to the end!
They should've stayed with the same narrator

cant wait to see what's next!! this was nothing short of greatness, the books leading up to this point had me on the edge of my seat the whole time. what an amazing ride thus far & I'm stoked to see were it goes. keep em coming stacy you f'n genius lady guru lol I love you!!!

the other two were better but it was still good. it set it up for another book well without being a cliff hanger